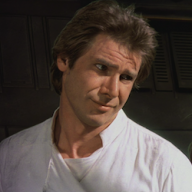 
Kye Da’quzel, the newly minted proprietor of The Wellspring, couldn’t have asked for a better day. It wasn’t often things went right on the Smuggler’s Moon, and he wasn’t interested in alerting the deity of luck to his prosperous tidings. The casino was finally finished. Even now as he gazed down from the VIP deck, he couldn’t keep a smile from his face.

The slots were packed. The smell of burning spice filled the room with a dizzying fog of smoke nestling in the newly added skylight. The purr of an indigo Twi’lek wearing nearly nothing took his attention from the roof. Dila slid up behind him and wrapped her hands around his waste.

“You did it, mi amour,” she whispered so only he could hear. Meanwhile, her right hand playfully tugged at his belt.

Kye’s voice leaped an octave as he giggled like a schoolgirl.

“Stop that!” he tried, but there was no conviction in his voice. Dila kissed his neck and—- CRASH!

The skylight above imploded showering the showfloor in traspirsteel. Kye was blown backward, on top of Dila, screaming like an R2 unit on fire.

Gut-wrenching pain spasmed through his body and kept wafting over him in waves. He was disoriented, but his mind was starting to come back online. His hearing was coming back. At first, it was just a high-pitched whine, but now he was starting to be able to pick up voices. They may have sounded like they were on the other side of a soundproof wall, but it was a start. His vision was next and he wished he’d been blinded by the att… THE ATTACK!

His body tensed to move but he couldn’t. As soon as he moved to sit up a sharp wrenching pain emanating from his nethers— “DILA!”

Kye reached down and carefully pried her vicelike grip from his fruits and immediately felt waves of relief and panic smash into him. Once freed he sprung off Dila, who yelped in pain, and sprinted for the railing. All around his beautiful casino was in ruins. The grandeur he’d been wallowing in was gone. Duracrete blocks and dust covered everything. Tears welled up in his bulbous crimson eyes. A luxury speeder was sticking straight up in the center of the showfloor. Kye began to blubber.

Suddenly, the passenger door flew open. Kye squawked outrage like a pissed-off bird, as the figure stumbled out of the vehicle-- It looked like some karking Rodain-- too drunk to fly straight. This was absolutely unacceptable! This bastard would pay for ruining the best day of his life! The Neimodian scrabbled for the nearest lift calling any and all thugs he passed to his side on the way. To Kye's surprise, the elevator music was still playing. Silver linings glint brightest in the dimmest light he supposed. The lift slowed and the doors opened sluggishly catching about two-thirds of the way open.

Kye flew into a full-blown tantrum. He raged against the door punching, slapping, and kicking the thing until it shakily slid the rest of the way open. He straightened his tunic and coughed before saying, “Oof, almost lost my cool there.”

A human enforcer with a thin jagged scar across his left eye nodded behind Kye. The Niemoidian whipped around just in time to catch the end of a fight. The left hook of an armor-clad humanoid snapped the head of his opponent to the side and sent him, or her, Kye could never tell with Rodain’s, sprawling.

The humanoid lifted a gun and fired a net over the Rodian. Sparks shuddered from his left hand. He shifted his attention to Kye and his crew. The being rolled his shoulders and started heading their way. Kye lifted his hand, and the four goons behind him lifted their weapons. The humanoid stopped. From this distance the wear on his gear was evident. His mechanical left hand was opening and closing sporadically, his jacket was torn and blaster scored, and the tactical pads he wore were obviously warned down. This guy was either on his last leg or had a death wish. Now that he knew the humanoid wasn’t a real threat, his machismo came back in force.

“That’s what I thought,” barked Kye with shrill laughter. He loved having the cards stacked in his favor. “Do you have any idea how karked you are?”

The roughneck pressed a button on the side of his helmet and the visor receded exposing dark skin and hard eyes.

"I’m going to place a transponder on the ground, then slide it your way,” said the man. Before Kye could argue the transponder was sliding across the ground. A glossy black little device stopped neatly between Kye’s feet.

“You are now in control of Mr. Devooo’s estate,” said the man. He gestured to the wreckage, "There should be enough to cover," It seemed as though he was taking in the gravity of the scene before concluding, "Uh, all this."

He turned to head back to, well Kye supposed, to Mr.Devooo. The blaster on his back was a mean-looking weapon. Kye could tell it was well maintained and the slightest bit of doubt began to erode his confidence.

“Who do you think you are?” screamed Kye in a weak attempt to remain in control.

The man stopped in front of the Rodain, who’s voice was quivering with fear, kneeled down, and slung it's body over his shoulder in a single smooth motion.

“I-I’m talking to YOU!” Kye protested, but even to his ears, he sounded like a petulant child.

Over his free shoulder, the man called back, “Aeron Mathis, Bounty Hunter.”