Blood and Darkness along the Sea: A Vampire: the Masquerade story 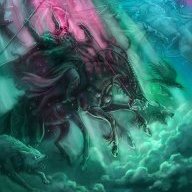 View attachment 3970​
Emerging as a prominent shipping city during the 19th Century whilst sharing an economic bond with neighbouring Manchester, the city of Liverpool was once North-West England’s greatest trading hub and port-of-call to any would-be traveller. As the years went on, the city would become a hub of culture, playing host to many musicians and artists; as a result of its cosmopolitan nature, much is the ethnic diversity present in the area. However, like her sister city further to the north, Liverpool has its own shadows…shadows that are older than the city itself. Like much of Britain prior to the Roman conquest, the area had played host to many Kindred from Clan’s Nosferatu and Gangrel, with a sprinkling of Brujah and Lhiannan who were concentrated in the Wirral peninsula. With the arrival of the Roman Empire came the Ventrue and the Malkavians, to further consolidate their domains in the area for the Empire their mortal pawns had built. Like their mortal pawns, they too set about bringing the native Kindred population to heel; those who resisted became ash. Things would become rather uneventful for the Kindred in the North-West, for as long as they didn’t rebel, their conquerors would leave them be. However, with the advent of Christianity within the Roman Empire, things became bloody for those who refused to bow before the new god. In particular, the Lhiannan in the area suffered the most heavily as Christians, both mortal and Kindred alike, put their groves to the torch and slaughtered them for refusing to acknowledge the Christian God. As such, there are so very few of them left in the region, with one only being able to find the Lhiannan in the Wirral…though such a sight might be the last thing they see. With the collapse of Rome and the arrival of the tribes who would become the Anglo-Saxons, the North remained completely unscathed for centuries until the arrival of the Danelaw. With the conquering Norsemen came more Gangrel, individuals who were more powerful than the native members of the Clan. To this day, the eldest of their number still call themselves Jarls in their old lands along the Mersey river and within the Wirral; though such hoary old Vampires are rarely seen these days, their descendants, mortal and Vampire alike, still walk these lands long after the Danes have been driven out. With the aforementioned event having took place, things remained surprisingly calm in the North, with the only intrigues and conflicts taking place between different Kindred coteries. However, this peaceful anxiety wouldn’t last long come the year 1066; with the onset of Harald Hardrada’s failed invasion attempt, and the successful conquest of William the Bastard, a new Vampiric power came to the fore. As the Norman conquest had been blessed by the Catholic church, the Lasombra saw their chance to expand their power within the British Isles, concealing themselves amongst the clergymen that came with the invaders. Competing with the Ventrue that still remained entrenched in the south, some Lasombra set their sets to the north, thus imposing themselves amongst the native Kindred. Naturally, this region was sparsely inhabited, though it didn’t stop the Lasombra from gaining power and competing with the Gangrel Jarls that ruled the area. The weakest of these Jarls fell before the darkness the newcomers wielded, but the strongest slaked themselves upon the Lasombra who dared to underestimate them. These shadow wars occurred alongside Hereford the Wake’s revolt, thus masking this conflict from the Kine. Eventually, the Lasombra would be defeated by the Jarls and promptly forced to flee back to the south where their fellows were ready to bring them to the Courts of Blood for their failure.

However, this would be the only conflict that the Kindred of the Northern England would be dealing with; due to the area’s light population, the fires of the Inquisition weren’t as prominent as the purges down south and the First Anarch Revolt had not occurred here. Still, it was enough to illicit the paranoia of the local Kindred…enough to make them attend the Convention of Thorns and pledge themselves to the newly-formed Camarilla. Apart from these events, the Kindred of Merseyside and the Wirral would find themselves relatively unmolested…not even the English Civil War and the subsequent reign of Oliver Cromwell affected the Kindred population, save for a shortage of Kine after the war had ended. Centuries would go by, being the shipping capital of the North-West, Liverpool would serve as a hub of immigration into the United Kingdom; just as there were human migrants, so too were there supernatural ones as well. Playing host to the UK’s oldest Chinese community, the local Chinatown plays host to a shadow war far older than the Gangrel Jarls themselves. Behind the scenes, the Wu Zao, a Salubri bloodline from the Far East, have long been in conflict with the Middle Kingdom’s indigenous Undead known as the Kuei-Jin, and their war has begun to spread into the area surrounding Liverpool’s Chinatown. Come the 50s, word would reach the Kindred of the area that the Anarchs of Los Angeles had thrown off the shackles of the Camarilla, and the Anarchs in Liverpool began to make plans to cast out the Ivory Tower in their city. As if to make matters worse, during the 20th Century, the Sabbat had begun their moves, striking at the local Camarilla from the city’s poorest areas. To this day, the slums that comprise Toxteth and Ansfield still remain bastions for the Sword of Caine. Come the 1970s, with the new developments designed to pour new blood into the country, the Liverpool Anarchs finally saw their chance to muscle out the Camarilla. By investing their ownership into new properties and buying from the weaker Ivory Tower Kindred, the Anarchs were able to force their rivals into the somewhat affluent outskirts of the city. With the backing of the Gangrel Jarls, the Anarchs solidified their gains within Merseyside and the Wirral. Come 2017, the Sabbat are once more on the move, and the Camarilla, under Prince Wellfield of Clan Ventrue, with the backing of the Tremere, are once more seeking to reclaim their losses from the Anarchs. For as long as the Jarls still walk the Earth, that task might be more difficult than one would imagine.

This is where you guys come in, you are each of you newly-Embraced Vampires, having only been so for a few weeks. This is where you establish your character...and whether or not you would like this to be a written thing or played on Roll20.

Character Template
Name:
Clan/Bloodline:
Age: (Remember you're a fledgling, you're either age you were at your Embrace or your birthday has recently occured)
Generation: (Can only be as low as 10th Generation, given that Generation is an indicator of raw power)
Gender:
Ethnicity:
Disciplines: (List them in order of Specialisation)