Ask By Fire and Sword 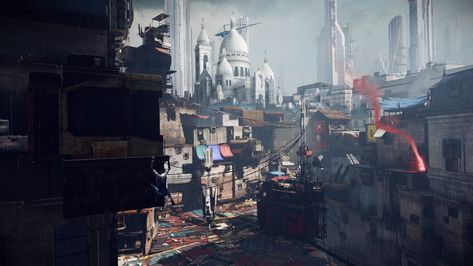 Inside an open large tent tavern sat at a corner was Chant Sindhu, wearing her typical flight suit while eating some soup. Beside her at the table was the green astromech and copilot Ness. The droid in question was rotated her dome head, viewing the rest of the establishment filled with local patrons and a few offworlders like themselves. Slurping some of the soup using a spoon Chant subsequently said.

“Relax girl, I got a good vantage point from here. If anyone wants trouble with us I’ll see them coming first.”

Ness, still on the watch fired back in droidspeak causing Chant to groan and rubbing the side of her side. Her metal partner was loyal there no doubt of that and she truly appreciated it. All the same, best not to look for trouble in every corner.

“Ness, I’m well aware that there could be some sleemos here. But we’re leaving soon for the market nearby then back to our ship. So please don’t put your circuits in a twist. What’s the worst that could happen?”

In response Ness chirped back in a cautious matter. Admitting defeat and letting her droid play sentry Chant focused on eating the rest of the soup. They may be in a poor section of the spaceport but the food was excellent in the pilot’s opinion. 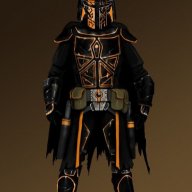 Dolworth sat the Raza down on Pad 3, letting Dusty set and lock. He grabbed his AC280 and threw it securely over his shoulder. He was not making the same mistake he made on Lothal. He let his heavy boots hit the dirt before the ship even finished landing, turning to look at Dusty even if he were a tiny thing obscured by the pilot seat, "I'm just here to check in on some bounties, grab us some food and supplies and well be back on the Hyperlanes before you know it!" he assured the droid, hitting a button and letting the hatch seal. He listened for a thud before turning, knowing for certain the ship was locked down tight.

He turned to see the streets of Gesco City. Bakrua, he thought as he began walk down the streets, This place is close to Endor...practically frontier territory. Place is as wild as you can get. He continued to walk down the streets, He could feel some of the locals looking at him. He knew that being in this kind of armor was going to attract attention. He just hoped that some drunken or Spiced up fool didn't get the "Courage" to go looking for trouble...
@Minuteman75

Letting out a satisfied sigh Chant placed the spoon on the now empty bowl. Scratching the right side of her neck the young pilot sat further back in her chair. It’s moments like these that she now appreciated. With a snort Chant thought back to younger herself who couldn’t wait to take on the whole galaxy.

Look where that led me. Thought the Mon Calamari in sudden bitterness. Closing her large round eyes and biting her lips she fought back the personal demons that threatened to come out.

Struggling to keep herself under control as she shook all over Chant subsequently felt a metal prod touch her right hand. Knowing who it is and grateful she whispered in a broken voice. “Thank you Ness.” Slowly but surely the former combat pilot calmed down long enough to get up from the seat with her eyes opened.

Ness finally let go but click and chirp her concern. Chant nodded but didn’t say anything else. Instead she walked away from the table with Ness. Just as they moved out Chant tossing a coin to the Gamorran chef behind the main counter. Catching it the pig muttered thanks in her native tongue.

With that out of the way Chant and the astromech Ness exited from the tent into the greater marketplace. Little did she or many in the city realize there were several vessels in an attack formation that just came out of hyperspace in front of the planet. Warfare will soon seize the day.

Dolworth kept moving along the streets, keeping an eye out for the nearest bounty board. Nothing seemed to be popping out to him, causing him to groan Maybe coming here was a mistake he thought as he continued on....

In the midst of the bustling crowd, Chant and Ness navigate through it to view the market stalls situated all around them. Approaching one filled with mechanical parts and other pieces of machinery on display the pilot stopped. “Hmm…” Looking down at the table she then turned to Ness.

The droid immediately answered with a negative in droidspeak. Shrugging her shoulders Chant was about to try out the next section when all hell broke loose. The top half of a tower in construction behind them exploded yards away. Caught off guard she looked up in terror before hearing the familiar of starfighter engines. Soon a swarm of unknown fighters were strafing the streets.

Screams and cries erupted among the crowd who scattered in all directions. Knocked to the ground by one of the panicked bystanders Chant spit out dirt before colliding with another person. “Stang!” She muttered to herself trying to get back to her feet.

Dolworth rounded another corner when the sound of screeching fighters and exploding buildings rand in his ears. He looked up to see raiders swoop overhead.

“Of all the freaking bad luck!” Roared Dolworth, “I should have listened to Adenn and went to Navarro!” He said as he moved to toe cover. As if right on time the comlink in his helmet began to chirp like crazy, causing him to click it, “I know! I know Dusty!” He snapped, “Just prep the ship! Power to shields till I get back there!” He said as he began to haul ass...
@Minuteman75

Ness ranted in binary at her partner she just as got up. “I know, I know. Cmon let’s get out of this street.” Chant retorted angrily as she ran for a nearby alleyway. The green astromech followed right behind, speeding as fast as possible.

High above them the invading fighters circle around, engaging any ship that dared to lift up. A large freighter exploded, breaking into large flaming pieces chasing unto people and building alike. Soon transports began descending in several sections across the now chaotic city. Out poured from the landing ramps came white faced Nagai in black armor.

With battle cries in their native language they charged out armed with blasters and blades. They killed indiscriminately all who fell into their path whether they resisted or not. Those now slaughtering the inhabitants were looting the shops and homes within their reach. Cries of terror and agonizing pain were uttered across the city. Death and suffering now reigns here..

Dolworth spotted the incoming Nagai, readying his rifle before dodging into a nearby house. He waited as they came nearer. Without warning they bashed down the door to the house Dolworth was in. The sounds of blasterfire and screetches were heard then silence...Dolworth stepped out a moment later, covered in Nagai blood and grunting as he shouldered his weapon. He turned to see several Nagai staring at him before he rolled back his shoulders. They leveled their weapons as Dolworth leveled his. Both sides opened fired...
@Minuteman75

Chant’s heart raced rapidly as she and Ness continued their flight through the labyrinth of alleyways. Up in front were a dozen or people doing the same. Suddenly several large pieces of debris fell upon the crowd. Screams followed before the rubble crushed all those in its way. Except for Chant who fell on her back next to Ness the droid.

Coughing, the Mon Calamari forced herself to get up. To her horror she can hear nothing from the new makeshift mound of stone and bodies. Not wanting to spend another moment she quickly got up covered in gray dust and said to astromech beside her.

“The other way now!”

Complying they race back a few feet to another corner. They can hear blasterfire and shouts all around. Fear gripped the pilot’s young soul but she pressed on, urged by Ness in droidspeak. So focused on their flight that they accidentally ran into one of the invaders shooting at Dolworth. With a grunt the Nagai fell and the sudden motion distracted his fellows, giving their opponent a much needed diversion.

Dolworth started shooting, letting bolts wizz by him as he focused on the Nagai Pirates. When he saw the Mon Calamari knock one of them down and the others turn to look he did not hesitate. He opened fired, cutting them down before yanking his vibroknife and yanking the Nagai on top of the Calamari by the back of his head. With one swift motion he slit the Nagai's throat deep. Blood splurted out as he was thrown aside a lifeless corpse. Dolworth took in a gust of breath, shaking his head as he sheathed his knife and shouldered is rifle. He turned to stare at the Mon Calamari and her droid.

"Hey" he said bluntly, "You still breathing?" he asked in the most polite voice he could make given the circumstances.