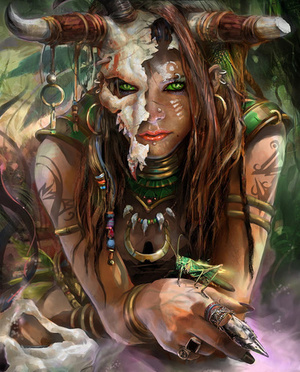 Zelosian offshoot/ Children of Eden are evolved predatory descendants of Zelosian refugees that travelled to Dathomir. Their DNA has become viral and they are now spread throughout the galaxy and can be found in various forms.

It is difficult to determine if an individual is a Child of Eden. They are able to overwrite the DNA of any species they interbreed with and convert it by the next generation, but the offspring can have the appearance of the other species as a way of camouflage for the infectious DNA to take over new environments.

Yet there are clear indications that can help identifying them as such. At large, the offshoot still reminds of baseline Zelosians, and they share traits, such as chlorophyllic blood that gives both blood and eyes the characteristic shade of emerald green, cellulose fibres for a large portion of muscle mass, a tendency to become drunk from sugar, and the ability to live for long time by conducting photosynthesis through chloroplasts with sunlight and water only.
But where Zelosians are said to have evolved from plants to human shape, Children of Eden are evolving to become more feral and effective in survival.

They all possess a very powerful instinct to hunt and bring down prey, and they have sharp fangs to effectively tear through flesh. The muscular cellulose fibres make them both flexible and fast. Their eyes have contracting pupils that enables them to focus on things far away and gives them vision in the dark. During hunt blood flows to their eyes for optimal oxygen supply, giving the sclera the same kind of intense emerald green as their pupils. All of this paired with sensitive hearing aids them well in hunt. They seem to thrive in darkness, where they can hide. Much like liana, they are great climbers, and can stick to surfaces with hands and feet, including ceilings.

All Children of Eden have a deep bond with one another, and the majority favours the company of their own kind over that of other humanoids of non-flora origin. They have been observed to be peaceful by default, but once threatened, or suffering from malnutrition and lack of sunlight, their predatory instinct is reinforced, often leading to cases of cannibalism on other humanoid species. This aggression seems to be mirrored by the others in the flock, making Children of Eden a force to reckon with, especially in high numbers.

Children of Eden procreates the same way mammals do, by meiosis. Thus, there is needed a male and a female in order to create a child. But it is not needed for both parents to be Zelosian. Either the male or the female can be of a different species, but should they bear offspring, the child will always be flora in origin. “Crossbreeds” therefore don’t exist with this species, as it completely overwrites anything mammal. The child can, however, bear a cosmetic resemblance of the other species as a way of camouflage.

It is possible for the species to evolve beyond cosmetic changes if needed for survival in new elements (e.g. gills in water), but such adaptations usually requires multiple generations to succeed fully.

The females’ gestation period is approximately 12 months, but the speed of how fast the foetus evolves can vary depending on nutrients and stress. During pregnancy the females’ skin changes to be clearer and semi-transparent as a way to take advantage of any sunlight.

Children of Eden have been treated as pests by the galaxy at large, due to their invasive nature and how fast they are at adjusting to new environments. To some it instills great fear, and they are persecuted and treated as lesser beings, contrary to their sentient nature.

As descendants of miners on Zelos II, superstition and spirituality are not uncommon and have been used for decades as way to prevent danger and overcome hardships. There is a natural respect for the dark with many Children of Eden. Even if they have gained the ability to see in the dark and take advantage of it, they are very aware that there may be other things in the shadows that are hiding as well.

Many branches of Children of Eden practice various forms of Shamanism and traditions that can be traced back from times of cooperation with the witch clans on Dathomir, and connection with nature is highly treasured as a way of grounding and self-preservation.

Children of Eden are capable of speaking Zelosian. But their variant of Galactic Basic is much closer related to Imperial Basic as a remnant of Imperial supremacy on Zelos II. Typically, with words of Dathomirian and Paecian mixed in.

The way their larynx is built makes it possible for them to use clicking sounds and growls for additional communication.

An unknown time before 4 ABY, a small group of Zelosians fled the mining facilities of Zelos II with high hopes and dreams to escape the iron fist of the Empire they had lived under for so long. The group debated and decided to hide somewhere the Empire never would plan to look for them. And somewhere that was too dangerous and difficult to follow. They decided to hide under their noses – on Dathomir.
With the dead walking at night and merciless labour by daylight, the group didn’t feel they had anything to lose.

One last time, the group made their silent tribute to the loved ones they knew they never would meet again, and the place they always had called home. By the soft flicker of a lantern’s guiding light, the group left Zelos II in the dark with a small collection of tools, weapons, journals and provisions. And headed into the unknown.

The group created a small settlement, but slowly began succumbing to the elements of Dathomir over time. Some became sick with unknown illnesses or from trying to test edible plants. Others were killed by the fauna. Parts of the group became foolhardy and began to fight the local populations for resources and land. The survivors had to retreat further into the barren wild to hide.

Desperation and starvation became inevitable, leading the Zelosians to adapt to survive. They became predators instead of hunter-gatherers. And they developed cannibalistic traits towards other humanoids that dared wander too far into their land, as both a defence mechanism and an opportunity for easy nutrients.

Over the next couple of generations, the children of the first settlers evolved. Their senses sharpened, they gained the ability to see in the dark and they grew fangs to process meat with less energy and a predator-like instinct. Some of the new generation tried to reach out to the other clans to build alliances, and it was discovered that this type of Zelosian could interbreed with other humanoids.

The new traits, instincts and Zelosian blood seemed to be dominant in all hybridizations, and they had a tendency to gang up with their own kind against others. The mutated Zelosians gained the name Children of Eden, and today the infectious mutation is widespread in the galaxy, hijacking other species.

To make a predatory plant species that is closer to dryads in nature than the original Zelosians are, and to expand on the original lore.
Last edited: Nov 20, 2022