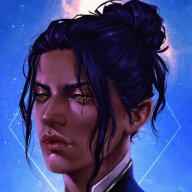 ​
Casinos more lucrative and numerous than Canto Bight, uncountable numbers of shops and services, gladiator arenas, docks big enough to handle Star Destroyers, and a vital trade and refuel point along the Perlemian Trade Route. A giant, floating pile of money, opportunity, and vice all condensed down into a structure of durasteel and glass, all owned in the modern day by a single old man. A man who could, literally, fill a swimming pool with gold.

Nakoa had business there and as had become the norm, he'd dragged an acolyte into it. One of the very rare Sith 'Purebloods'- honestly it sounded kind of offensive but whatever- who'd joined the Empire itself. The promise of lucrative payments probably helped, to be honest, but who didn't like piles of money? Money was useful.

For the moment the Wrean Champion was dressed in a white suit, resembling the son of a crimelord more than a Sith by far, with his long hair braided neatly back and a variety of jewelry. He was waiting for his partner the Cosmic Lounge, a long-standing upscale casino that'd existed for hundreds of years. In his hand he held a nice dirty martini he'd been sipping on while snacking on jumbo shrimp. So much jumbo shrimp, actually. He loved shrimp.

While a Sith Pureblood would draw some attention for their appearance in normal circumstances, two things worked in their favor. One: The Wheel was a massive melting pot of species from across the galaxy. Two: Barely anyone knew what the hell a Pureblood even looked like. So, hopefully everything would work out somehow or other.

And if not, Singh had backup plans. 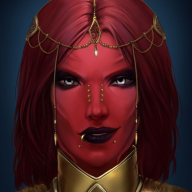 Casinos were one of the few places in the galaxy where your species, faction, or religion melted away. There was only one thing that mattered, and that was whether you had credit to your name and were willing to use it. It was a delightful surprise to receive an invitation to attend some manner of event, the lucrative reward aside, it also presented an opportunity to work alongside another Sith she had yet to meet.

Cyutadakyr was by no means shy about dressing up, finding something to match her partner's white suit. To the unsuspecting eye, she might pass for a shade of Induparian, or perhaps some mix of Zabrak that had the misfortune of not growing the horns. Either way, it was perhaps unlikely to run into anyone who would either notice or care, for like everyone else she held her small clutch, ostensively, to protect a stash of credits.

Of course, winning and thereby increasing your pile was the name of the game and one that Cyu enjoyed greatly, but the real pleasure came from witnessing that cruel paling of the color from a face that was so certain of victory, that the defeat itself seemed to claw its way out from inside them. The rising high of victory was crushed in an instant beneath the immense pain of losing it all just as quickly.

Unfortunately, she wouldn't be able to spend all her time indulging in their misery, as she made her way toward her companion. Though she had little information to go on about the man, she was certain that this night was going to be an interesting one.

Nakoa's head tilted in Cyu's direction as she approached, then turned to glance her way, an array of earrings glittering strangely in the multihued cantina lighting. They flashed a smile that was all charm and indicated the seat adjacent to them, sliding his drink slightly to the side to make room. It was a little time yet until the coming events and there was a need to discuss details more personally.

Once the other Sith joined them, Nakoa's smile reduced to something more conversational. It didn't match well with the flat affect of accented basic as they spoke. "White suits you," he said by way of greeting, flicking the booth's privacy switch just in case. "Call me Singh. How good are you at gambling, and what's your drink tolerance?" were asked without context. Today would certainly involve gambling and drinking.

"People with influence in this region will be present. They don't appear in public often, and we need a few tidbits to get anywhere." The event today was essentially a gamblers' gala, one that'd been held regularly since the Wheel became the trade power it was today. Even active war wouldn't stop those beings of vice and privilege. If anything, it encouraged them. For his part, Nakoa could drink and was good with a gambit.

The shimmering lights, holo screens, and immaculately dressed all fed into the illusion of grandeur that the casino sought to bring. Cyu was all here for that, plus the chance to get to put a few of her talents to work just made it even better.

After taking a seat with Nakoa, she smiled at the compliment, a small hint of blushing along her crimson cheek. "Thank you, I could say the same for you. Nice to meet you Singh, I'm Cyutadakyr but most call me Cyu." She left the part out that it was because they often couldn't pronounce her name. As for gambling and drinking, those would naturally go hand in hand although her experience hadn't been the best.

"That depends, if you want me to look like a big spender and an even bigger loser for the house then I'm great. If you're hoping for me to score big and bring in some heavy purses then perhaps not. Though I'm happy to play any part, as part of the con. Alcohol is a toxin of which I am deadly familiar, don't you worry there."

Cyu had covertly scanned the room as she had entered, and while she hadn't recognized any, in particular, wealth often found a way to flaunt itself. Ironically, those often with the biggest pockets tended to appear the most modest as they didn't share the same insecurities as those of more meager standing. With a smirk resting on her face, she could only ask "What did you have in mind?"

"Then Cyu it is," Nakoa confirmed with a sip of his drink, a nail ringing thoughtfully against the glass. The Wrean's smile didn't falter for a moment, body language casual and open. Amber-gold eyes wandered the room while Cyu answered with elaboration and specificity. Eager to please, this one?

A finger flicked an earring. "Something special. The brightest glitters are never gold." That effortless smile shifted a step towards grinning, letting Cyu digest that statement in whatever way she took it. "There will be gold, though." Oh yes, there would be no small amount of currency of all sorts today. Nakoa considered it a fun little bonus. After all, money can buy all kinds of things.

"You'll spend and lose while attracting attention with pleasing crimson hues. There'll be a woman here we're looking for all in blues. Once we have her cornered, she'll fold." Nothing in his expression or body language gave away why he was being so vague, whether from lack of concrete knowledge or for his own amusement. Either way, he did add, "She'll have a mighty mane of pure white," to the list of details.

"I'll be nearby to make sure luck's on our side." Not every Sith was good at the kind of trickery best for games of chance. Most weren't, actually, to the point Nakoa'd be surprised if they could even spell 'subtle'. He could spell subtly just fine.

Cyu shook her head to his last question as she considered all that Nakoa had said. Spending another's money was always easy and with a little acting on her part and luck provided by his truly, they would certainly pull off something remarkable.

The pureblood gathered her things and purse of credits and took to the floor in search of their prey. For now it seemed that she either hadn't arrived yet or was too preoccupied elsewhere. No matter, this would give them an opportunity to share some wealth beforehand.

In a way it might even have been for the best, as only winning would surely draw attention from the house. Cyu parked herself at a nearby roulette table and bet a small amount on red, her favorite colour. Unsurprisingly the black won out and she feigned disappointment as the credits were pulled away.

Tonight would be fun, she thought to herself.

No questions for that nearly-nonsensical poetry? Nakoa determined then that this acolyte must be well used to following instructions. Helpful. Although to be fair, she was going to be paid.

Once the event began and Cyu found a roulette table, Nakoa themself down at a nearby sabacc table, allowing him to keep watch on Cyu's game. He was actually good at Sabacc even without any "extra luck", generally speaking, but that wasn't actually the point of today. These events and games attracted certain individuals that he really wanted to get to know better, and certain individuals had certain habits that certain others might certainly exploit.

As the cards were dealt and Cyu was offered a complimentary drink, first Nakoa had to ensure the acolyte both understood the idea and had the wiggle room to enact it. On the Sith pureblood's third spin, whatever her choice, a soft nudge of intent would help the ball onto the color she'd picked, if not the number, giving her some decent winnings.

Nakoa meanwhile folded in his round of betting and lost a mild sum. "Lucky first time, aye?" an older gentleman with a truly magnificent white beard commented to Cyu, pointed ears obvious on his bald head as he sat down all seven feet of him in the seat beside her. "Not seen you here before."

The Wrean watched their interaction through his peripheral vision.

The disappointment of losing a bet was a face that Cyu wore well, nothing too dramatic but just enough to play the part while preparing to bet again. This time she'd take a broader look over the table as if trying to figure out the best bet, lingering her eyes on a couple of options before placing the moderate bet on even. Again, Cyu would find her 'luck' most unfortunately fail her with a second loss, holding a less than enthusiastic smile "Third times the charm, right?".

With a dry pout she gladly accepted the complimentary drink and cracked her knuckles in preparation for the next bet. The odds were surely in her favor to get a win sooner or later and to ensure that they were, she spread out a large bet across three numbers. It would increase the odds, but lower the payout to 11:1 - which wasn't nothing to sneeze at but it would also draw less attention while still achieving their goal.

With Nakoa's help, landed on 19 ensuring that she'd win the third spin. The pureblood gleamed with delight as her 'luck' had turned for the better, a large pile of credits shifted her way. The older gentleman's comment pulled her attention towards him and his extravagant beard. "Yeah, great huh?" Her face was brimming with excitement and flush with victory, a gamblers worst nightmare as the credits were sure to flow the other way soon.

With a coy gaze, Cyu placed another bet on red that would likely bust. "Doubtful, I can't imagine you'd forget me so easily."