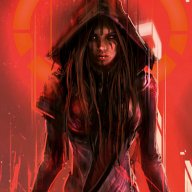 Norra had waited years for this.
It felt like millennia, but here was her chance.
Her opportunity.
Still, a seed of doubt had implanted itself in her chest.
What if she failed again?
"No." She told herself "I was 15. I'll do it this time. I will not hesitate"
She took a deep breath, looking at the foggy planet she had called home one last time...

Norra was a fool, at least, it was what she thought she was.
She was young.
Unsure.
If she failed, -again- what would happen to her?
Would she be executed?
She shuddered at the mental image of her limp, disconnected frail body, a red lightsaber lingering over.
What had she gotten herself into?!
She was dead, for sure.
Landing on Coruscant, she walked into a small store.

"Can I help you?" A high voice behind her asked, she turned around to see a young girl, with pale freckled skin and icy blue eyes jumping on the balls of her feet.
She had light brown hair she'd arranged into a braid over her shoulder.
She wore only cloth over her small body, and it was apparent she wasn't a warrior, and definitely not a Jedi.
Norra's overall interest in the child faded, though a trace of it lingered.

Who was this child? And -if possible- was she Aya's child?
She did the math and-
Ew, no way.
If the girl was at least fourteen, and Aya was the same age as Norra, then Aya would have had this kid at- 17?
That was still possible...
Norra's shoulders slumped, but she tried to hold them high again, like an imposing threat.
"I only want to know your name."

"My name is Nik, and if you're wondering- no, I don't work here, you just looked lost."

Hmm... If Norra acted nice, maybe she could gain Nik's trust.
"So... Nik, do you have a last name?" Norra asked, spinning a fruit from the produce section -where they were standing- casually.

"Yeah... do you have a name?" Nik eyed her cautiously.

Nik gasped, dropping the satchel she had been holding.

Nik had been staring... right into Norra's eyes.

Nik ran out of the store- faster than Norra could react to and process what was happening.

Norra picked up Nik's satchel and ran outside, it was foggy, but it might've been pollution, as well.
She saw movement to her left.
Quick movement.
She bolted towards it, trying to keep up with Nik's incredible speed.
As Norra ran, she thought.
Nik was using some strange force to run.
A strange force.
The force...
Norra squinted through the fog but could see almost nothing.
She sighed in exasperation, but continued to run towards the abrupt movement, anyways.
She collided suddenly with a solid object, it didn't knock Norra backward, but it knocked Nik to the ground.
She squinted and saw a small figure, at least, it was small to Norra.
"Why did you run, Nik?" Norra, asked, plastering a sickly sweet smile on her face.
"Your eyes! I-I know exactly what you are- you're a Sith! You followed me- You're gonna kill me aren't you?"
Norra threw her head back and laughed maliciously "You think I'd kill you? Really, that's all you see of me, being a Sith? A killer?"
She couldn't see Nik, but she was sure that there was a guilty look.
You must log in or register to reply here.
Share:
Facebook Twitter Reddit Pinterest Tumblr WhatsApp Email Share Link
Top