“From the plains?” slipped from him without thinking about it, shaking his head a bit he moved away a strand of hair that was in the way of the small wound on her forehead – after that he placed the bandage over the cut, and started wrapping it before finishing it with a small knot on the side.”I can see that you are cold Della, which is why I'm gonna let you have my cape wrapped around you.” he said with a smile, and removed his cape – wrapping it around Della so that she wouldn't freeze that much.”I'll be right back okay.” he said and stood up before walking out into the clearing, opening a small bag he had on his left he picked up a flare that would give of a red color as it was fired. That was, his friends would know that either he or someone else was wounded and needed medical attention. Closing the bag he held the canister in one hand, and picked up the flare gun that he had holstered on his right thigh – loading it with the canister he aimed it towards the sky and fired. A bright red flare could be seen on the sky, now it was only a matter of time before his friends showed up.”There we go.” he said to himself as he put away the flare gun.

Making his way back to Della he smiled.”Don't you worry, I've alerted my friends in the area. They'll show up soon, and with more help since I used a red flare. Meaning that either me or someone else is injured.” he said as he sat down and leaned against the rock.”Are you hurt anywhere else then just your head?” 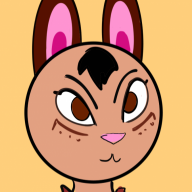 She gave a sigh as the blanket was wrapped around her. Its warming effects were immediate. Della could feel herself relaxing and becoming slightly more responsive. The pain in her leg returned and she gritted her teeth in response.

"<My leg. My leg is broken. > " She watched the bright flare fire into the sky. She became uncertain. How far away were they from the train? They couldn't afford to be spotted. What happened to Geist Weiss? Della then recalled how a burst of energy flung him from the train. He was most likely dead. Della couldn't sense him.

"<Sith. Geist Weiss. Sorcerers. They were at the station. On the train. He fell off. I think he's dead...I think a bomb blew up the station. >" Della felt her chest hurt from the stress she was under. Della had no way of knowing if this boy knew who Geist Weiss was. They certainly would at least understand that Della had been fighting the ones trying to oppress the Snamreg. Her life depended on it.

Leg broken, okay, some twigs that was sturdy enough and bandage that was what he needed to find next, bandages he had two left of still.”Woah, calm down Della. Sith? Geist Weiss? Sorceresses? What are you talking about? What station? What bomb? The only station I know of around these hills is the one in Skagrit, and that’s half a days march from here. If your friend is there, then I cannot allow you to try and get there, not when you are injured. And that's final.” at the end Simon tried to look grumpy at her to make her understand that she was in no condition to try and find a friend of hers that was miles away from where they where at the moment. But he couldn't hold that mask on for to long, it just wasn't his nature.”So just sit still and wait here with me until my friends show up okay?”

"< I have to know. I have know if she's dead. Geist, the sorcerer. The men who came here to oppress us. He was in charge of them. I got into a fight with him and another on the train. Then the station collapsed. He set off a blast. I think he's dead...>" Della made little effort to move. Even in her daze, the pain in her leg was sharp. It made her compliant.

She could hear horse hooves. They were rapidly approaching.

"<Simon! Simon are you okay?>" said a young man named Wildefreid. He was nineteen, known for his bravado with animals and had a knack for convincing horses to do just about any trick.

"< I was by the cabin and I took the fastest mare we got to check it out until we can get a truck here. You look okay. Whatchu got?>"

A man who came to oppress them? He didn't know anything about anyone trying to oppress them, at least not from the top of his head – but then again, he hadn't heard much from outside of Whitestone so it could be true what she said.

Hearing the sound of hooves in the distance closing in fast made him smile knowing that it was one of his friends, but who was it that would have seen the signal first? Moving out from the nook and standing up, he started to look around to see if he could see who was approaching. And with an even brighter smile he waved when he saw the galloping horse coming his way, upon hearing a shout he knew who it was. Wildefried. They had gotten along well this past week, sharing stories and talking about a lot of things.

“Yeah I'm okay.” Simon shouted as a response while Wildefried still approached, and when the horse came to a halt he walked up to it and held up a hand at it's nose – letting the horse know that he was a friend. Getting puffed on sightly by the horse, Simon placed his hand on the mare's nose and stroked it.”Good girl.” he said with a kind voice.

“Yeah, I'm okay. But I found someone who I think was in the train when it crashed, she have a cut on the forehead but I took care of that, and she have a broken leg. Think you could help me out a bit?” he said a bit jokingly at the end, he knew that his friend would help him.
You must log in or register to reply here.
Share:
Facebook Twitter Reddit Pinterest Tumblr WhatsApp Email Link
Top