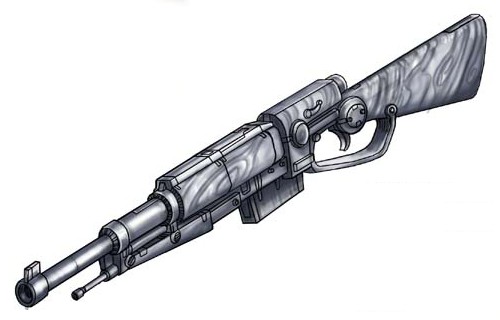 AMMUNITION CAPACITY
Internal magazine holds 5 bullets. The powerpack for the electromagnet is large and cumbersome, but can sustain 96 shots at full force.

DESCRIPTION​
"A blaster bolt is too clean for this type of war. A bullet makes a hole, and a hole bleeds, and a bleeding man is out of the fight. There's not enough bacta in the system to fix what this will do to you."
-CC-4269 "Dugout" describing the effects of projectile weaponry

The Model 47 electromagnetic rifle was developed during the second year of the Clone Wars by Czerka Arms, and was meant to supply firearms to Republic-allied forces on worlds that were too remote or inclement to supply with blasters and reliable blaster gas. In a rush to produce as many rifles as possible for the planet-wide conflict, numerous Litarr corporations licensed the design, producing several million units. Containing far fewer sensitive parts than a blaster, the rifle developed a reputation for ruggedness that endeared it to soldiers during the war and hunters and adventurers after the conflict. As the droid army became a more pressing opponent instead of organic enemies, the rifle was found to be inadequate for fighting mechanical targets due to the inability to penetrate many kinds of armor or cause sufficient internal damage to deactivate droids. Because of this, the weapon was relegated to a sniper role, attacking high-value organic targets, being more accurate and powerful at range than a blaster, which quickly loses ionization energy.

Following the war, the rifle flooded military surplus markets, and gained its sinister reputation as an assassin's weapon. Unlike blasters, the projectile of the M47 is invisible, with the signature crack of the round breaking the sound barrier being the only way to identify where a shot had come from. Because it is a physical projectile, it also passes easily through energy shields that may be protecting high-value targets. While military-grade scopes were issued during the war, they never were offered in the civilian market. However, any assassin, bounty hunter, or mercenary worth their salt has no problem fitting a third-party optics system. Poylarr laws were put in place to try to stem the flow of these weapons offworld and into the criminal underground, but the general state of extreme economic depression after the conflict meant that corruption was rife and excessive numbers of the rifle were smuggled around the galaxy.


INTENT​
The purpose of introducing this weapon is to give a weapon to my characters. It also introduces a bit of a more professional tool to people who want to use a slugthower distinct from a Tusken Cycler or Adventurer Rifle

Compare to the standard Cycler Rifle

RESTRICTIONS​
Unlike blasters which require simply tabanna gas, this rifle requires the appropriate ammunition to fire. Ammunition must be specially-made by a weaponsmith, as it is no longer commercially produced due to the age of the weapon. This means that actual roleplay may be necessary to simply restock.

While the ownership of this firearm is supposedly difficult to obtain for general citizens of the galaxy, the sheer number of guns surplussed and smuggled out over the decades means that every seedy weapons dealer or black market outpost will have more than a few for offer. Because of the underworld nature of the gun outside a very small part of the galaxy, this will likely only be carried by members of either the FIVE SYNDICATES or INDEPENDENT characters.