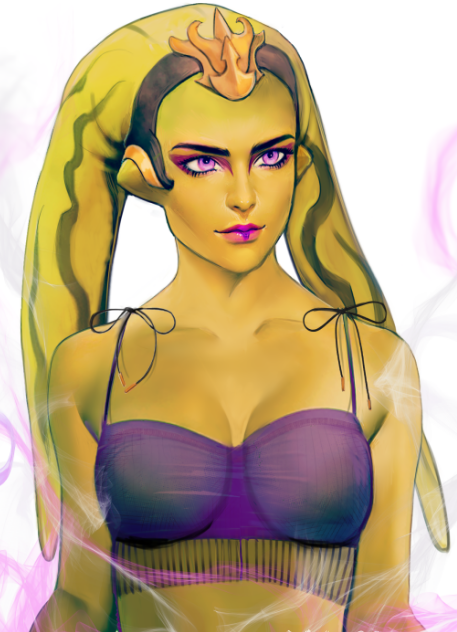 ► No​
BIOGRAPHY
Meela is a Twi'lek slave that was taken from her homeworld of Ryloth during her teenage years. She was abducted by a gang led by the crime lord Dantigo Fligorra who enslaved her and kept her as a dancer and entertainer for any guests visiting his hideout. When she was 23 years old, she and other slaves were tasked with raising the newborn child, Alisaah Tila, who had been taken from her family on Shili as repayment of a debt. Fligorra had wanted to punish Alisaah's father and taken his daughter as a means of doing so. Meela became a surrogate mother to Alisaah during the Togruta's time with Fligorra's gang. She taught her as best she could and introduced her to the joy of dancing, which enabled the two slaves to express themselves when they had no other way of doing so.

The pair formed a close bond during their time together, but when Alisaah was 10 years old, Fligorra decided it was time to sell Alisaah on. Meela and the other slaves had fulfilled their purpose and trained Alisaah to be subservient. He never had the need for a slave of her age but saw the opportunity to sell the young Togruta for a good profit to professional slavers who would pay good money for a slave of her age in good health. Meela was not informed of her master's intention to sell Alisaah and was not present at the time. The Twi'lek was unaware anything had happened until the Zygerrian's had taken Alisaah back to their homeworld. She was distraught when she finally found out that she had been sold. Meela was worried for the girl's safety, felt guilty and as though she had let Alisaah down by not being able to protect her, livid with Fligorra for what he had done and sad, because she realised that she may never see or hear from the girl again, having never had the chance to say goodbye.

Eventually, when she was in her mid-late 30s, Meela herself was sold by Fligorra who decided that he wanted "younger and more attractive" dancers, despite the Twi'lek having aged gracefully and losing none of her beauty. She had spat in his face when he handed her over to her new masters and swore that if she ever saw Fligorra again, she would kill him. Meela performs duties in hospitality for her new owners, but now resides in the Zeltros system.