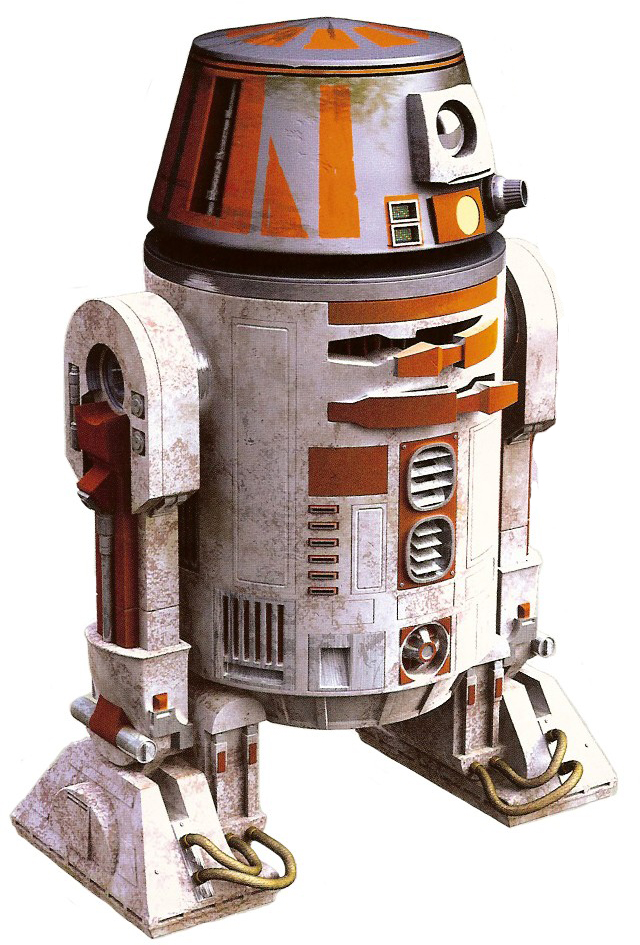 
DESCRIPTION​
In an attempt to repair its damaged reputation after the R5 debacle, Industrial Automaton created the R6. A "back to basics" design, the R6 was a slightly smaller, slightly sleeker version of the R2, a model which IA had also been trying to escape the shadow of for decades.

R6s are barrel-shaped droids, with locomotion is provided by tripod leg arrangement, each leg containing a wheel. These wheels can be magnetized to adhere to most metallic surfaces. R6 units are equipped with a myriad of sensors and tools, considered more than adequate to handle any task they are assigned; R6s can communicate directly with and run diagnostics on myriad computer systems, as well as affect physical repairs and calibrations even to complex drive systems and other machines. Despite this, they are compact, just under a meter tall, an improvement over their R2 predecessor.

Like most astromech droids, R6s can function as a substitute for a dedicated navicomputer aboard hyperdrive-equipped starships. R6 units are also popular as chauffeur droids for ground and atmospheric vehicles. Like their predecessors, R6-series droids cannot speak most organic languages, although they can understand them. They instead vocalize in droidspeak, or through text when connected to an external network or vehicle. R6 units are quick to develop more distinct personalities, especially if not subjected to regular memory wipes.

The R6 series did eventually replace the venerable R2 series in production, but Industrial Automaton factories actually produced the two droids side-by-side for decades before the full changeover was made. The R6 actually remains in series production to this day, an impressive feat for what is now such an old design; the end may be in sight, however, with the B series, which was designed to replace the R series as a whole, having been dominant in IA's sales charts for many decades.


LEGALITY​
Legal. Astromech droids such as the R6 series are permitted in most regions of the Galaxy.