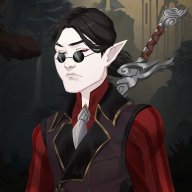 These are creature's of a rotted planet long decayed . History: they were remnants of a long forgotten war where all were defeated but the rotlins were still there you see they were once a separate species until they evolved to survive the rot but now have been rediscovered.
Food source: rot anything rotted by this disease accept other species.
Abilities: to give the disease of rot .
You must log in or register to reply here.
Share:
Facebook Twitter Reddit Pinterest Tumblr WhatsApp Email Share Link
Top