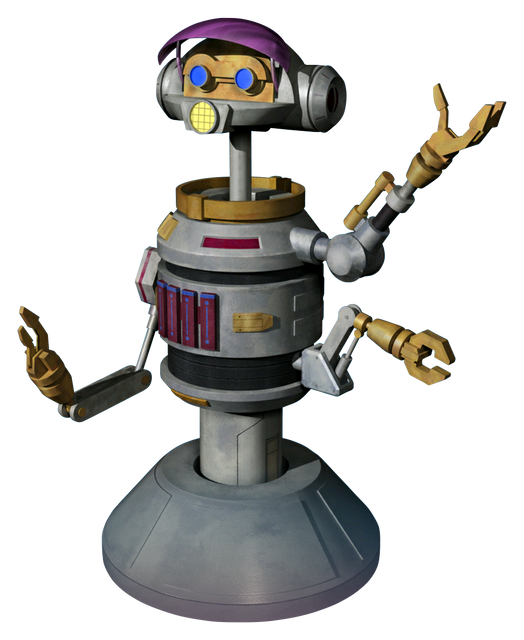 
DESCRIPTION​
The RX series is a popular model of pilot droid which was developed by Reubens Robotic Systems just prior to the Clone Wars, and which is manufactured by a joint venture with Industrial Automaton. Considered one of the best civilian pilot droids on the market even over a century later, the RX remains popular to this day, and is widely employed by various shipping and passenger lines as a supplement to or even in place of organic pilots.

The RX series is only semi-humanoid in form, although it intentionally incorporates design cues which are meant to appear friendly and reassuring to crew and passengers. Standing 1.26 meters in height, the droid is cylindrical, with a large, flared base containing a magnetic clamp which can adhere it to most metallic surfaces, as well as a small repulsorlift for locomotion, although it can only raise the droid a few centimeters off the ground. The droid's barrel-shaped torso sprouts a total of 3 manipulator arms, all of which can rotate freely around the RX's central axis; each manipulator is capable of successively more complex tasks, 2 being simple claws and 1 having 3 independent digits. The droid's head contains a pair of high-resolution photoreceptors, which can be protected by a retractable visor made of tinted transparisteel. Internally, the droid is similar to an astromech, and is capable of calculating hyperspace jumps on its own; unlike most astromechs, however, it does not have a multitude of built-in tools, although it does have a proper vocabulator. In general, the RX series is considered extremely durable and capable.

As a pilot, the RX series is not quite as good as a skilled organic pilot out of the box, but is a useful supplement. Many serve as copilots, performing work that organics would find difficult or boring, such as performing system safety checks and performing docking maneuvers. The type is also capable of performing maintenance and repair work, loadmaster duties, attending to passengers and other shipboard tasks. Notably, the RX contains a heuristic processor, giving it the ability to improve its performance and learn new skills at a faster rate than many other droids. If not subjected to memory wipes, they can easily catch up to their organic colleagues; there have been cases of RX droids performing tasks as complex as flying starfighters, or assuming command of warships in the absence of senior officers.

RX droids are widely used, although they are somewhat rare to see outside large commercial operations. Unlike many other pilot droids, however, they tend not to be resented by independent pilots; many who earned their wings flying for large shipping companies grew to like their droid copilots, and remember the type fondly.


LEGALITY​
Legal. Pilot droids such as the RX series are permitted in most regions of the Galaxy.


INTENT​
To bring a droid from canon into our site's fanon.