The Battle of Ryloth 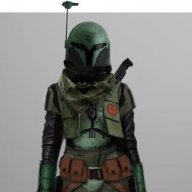 Minerva couldn’t help but admire the fact that a star destroyer was sinking toward Ryloth’s atmosphere. Considering her Alderaanian ancestry and her Mandalorian upbringing she felt a sense of poetic vengeance. Whoever goes into bed with the Sith deserves this and more. The merc thought to herself.

Subsequently Curse wiped out two of the pursuing alerted her about the survivor coming her way. “Roger that.” Minerva acknowledged, swifty aligning her turret. As soon as the fighter appeared, she unleashed a short but murderous barrage. Struck in the cockpit the TIE exploded into space dust and burning pieces of shrapnel.

“Yes!” She cheered, earning the final kill for their crew. Sitting back Minerva said out loud. “Once we get ground-side, I’m going to hunt for some more enemies.” 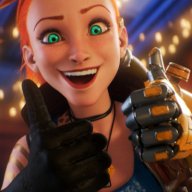 Sighing a little at the news that Curse had dispatched two of the pursuing Tie fighters, whilst it was a relief that the buzz droid had dealt with the Rim Hopper's pursuers, the half baked plan for dealing with the imperial fighters was now looking to be pure over kill for just the one remaining fighter. Watching as the remaining fighter broke out from the underneath of the ship and streaked ahead, Eisa watched as Minerva dealt with the last of the Fighters that had been harassing the freighter and it's crew - Perhaps it was probably safer for all those involved she didn't dump some fuel cells as a means for scoring a few kills of her own, ah well the life of a pilot it is for me Eisa mused to herself before levelling the freighter off and manoeuvred it towards the planet, giving a wide berth from the Star Destroyer.

Easing off on the erratic manoeuvres, the fiery haired spacer leant back in her seat a wide smile crossing her lips as she looked towards Minerva, before tilting her head to the side to hear the excitable chittering from Curse behind them. "Yeah there's gonna be more planets that need saving" Eisa called out, before reaching over to turn off the stereo - the need for high tempo music seemed to have now passed as the battle was easing off and coming to a conclusion, which ships jumping out to hyperspace and making a retreat.

"Ya know, this has been the first time you've worked together without arguing" Eisa reflected as she prepared the Rim Hopper to make entry into the planet's atmosphere, A chuckle passing the spacers lips as the voiced realisation set in. "Perhaps we'll make saving planets from Imp wanna be's and kicking the assess of crime and War lords our team building exercises" she added, as she flashed the Mandalorian a quick grin, no doubt there would still be occasions when the crew are at each others throats. But it seemed that they had something that brought the crew together into a relatively cohesive team.

"Curse, can you determine the co-ordinates of where the star destroyer is going to come down, We'll go get front row seats and have a well earned beer" 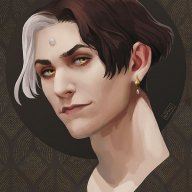 What a shame. It seemed their little game was ending early. The massive ship shook, breaking the lack and sending the combatants in opposite directions, the corridor seeming to twist as the vessel correct orientation was violently lost. Wolfgang slid back and left in the direction gravity was taking him now, away from the two Jedi. It was time to go, but lucky for those involved, a ship crashing under the pure influence of gravity wasn't exactly the fastest thing.

Wolfgang turned his body and tucked his legs in, throwing his shoulder into a turning twist to skip the step of falling and instead land boots down on what was a few moments ago a corridor wall. He slipped back down another corridor that had become an angled fall, controlling his descent with the Force. He had his own way off the ship, having anticipated it would eventually be disabled. Without the support of its many guns and swarms of fighters, Imperial Star Destroyers were notably vulnerable to precision strikes. Whoever had decided to send this particular ship clearly hadn't read their history.

Jerex was of course welcome to join him, which was indicated by a brief wave toward the corridor as Wolfgang passed. Doubtless they would encounter the two Jedi again at some point. Their order tended to get involved in things, after all. For now, however, Wolfgang had done as he was asked without complaint. A lost asset was worthless and to be discarded. Besides, it wasn't his ship, and he was trying to leave before it hit proper atmosphere, or at least before it hit ground. The Imperial II was not designed to function in atmosphere or land under any circumstances and he didn't feel like experiencing what it looked like when it made landfall. 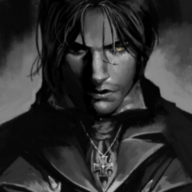 There was chaos in the destroyer as various systems began to fail. Power lines burst and fuel lines detonated. Many corridors were shut off to prevent depressurization of the entire ship's atmosphere as holes through the hull had been ripped into space. Through all this chaos, Talak pushed his way through the ship for the escape pods. His lightsaber had been extinguished, and most people were no longer interested in stopping invaders. Everyone was simply out for their own survival.

With no small amount of effort, Talak managed to make it to the escape pod bay where many had now gathered. Men and women from the ship's crew and marine complement were clamoring to find their own exits, some heading for the escape pods while others made for the hangars.

Talak ensured that other members of the boarding crew had gotten into their own pods and made one final look back at the ship. It was still rumbling under his feet and he got the sense that its acceleration toward the ground was only increasing. While the impact wouldn't kill everyone aboard, it certainly wouldn't be good for many. Everything from minor injuries to lethal damage would be dealt to the crew members. But now wasn't the time to think on those things.

He swung into one of the pods, slamming his fist down on the activation console. The door snapped shut behind him with a hiss and he felt the abrupt acceleration as the thrusters activated. He began the descent toward the ground, and looked out the viewport at the remains of the battle.

Debris rained through the atmosphere and the hulls of ships were now strewn even further over the landscape or Ryloth. Fighters, support ships, and even cruisers had been strewn across the sands of Ryloth. And above it all was the destroyer. Its bridge was aflame like a torch, and the nose had veered toward the ground.

He watched it continue its path down, accelerating under the pull of the planet's gravity before slamming into the ground. It skimmed over the sands a bit, kicking up an enormous wave of particles that was enough to bury anyone or anything nearby before the ship's hull final gave way under the strain of impact and a thousand laser cannon shots. It snapped nearly in two at the center, both halves continuing to slide over the sands before coming to a smoke, burning finish at the end.

And with that, the battle's outcome was assured. There were still Sith that would need to be driven off the world, but the major threat to the Twi'lek people had been stopped. Yet he knew the battle was far from over.