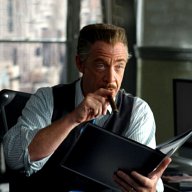 JJ sat in his office chair, munching on the butt of his cigar as he blew perfect smoke ring after perfect smoke ring. All around him, various holos and news programs were running, one such coming in from the world of Belsavis, namely from the lips of their senator. ".. Jayce Jonas Johnson, you are hereby banned from the great world of Belsavis, Brother. You were trash on Coruscant and you're trash now. And you should sleep with one eye open, Brother, because the Hulkster.. the Hulkster is coming for you!" There was a thin smile around the cigar. If he was pushing buttons, he was doing it right.

He laughed as he shuffled through the various papers on his desk, each of them a death threat. Some from relative nobodies, some from thugs, some from people of real power, and one from possibly a child that was written in green crayon. "JJ, you've outdone yourself." There was an air of triumph as he popped up to his feet, snapping his suspenders against his chest before pulling the jacket on. As he walked around the desk, he walked past a white and black costume: The Krykna-man. Just another menace, hiding behind a mask. He had brought them down too. Just like he'd bring down the Jedi and the Sith. Nothing was more powerful than the power of the press. "Hoffman! Get your scrawny ass in here with a camera!"

As Hoffman rushed in, camera rolling, JJ would get himself ready to speak. "JJ here, and with great news! We have so violently shaken the established order! So fundamentally hindered the oiled machine that yours truly is now being flooded with murder threats and banishments. One of the latter is from some pompous ass from Coruscant, some of you know him, some of you know of him, either way, he is now being Cancelled! Goodbye Senator Maverick of Belsavis!" Blowing out another perfect smoke ring, he'd look back to the camera. "And thats not all! Senator Morndell Avon of that backwater pisshole known as Chalacta, has sent me.. ME! Jayce Jonas Johnson, he sent me a cease and desist hiding a death threat! Well listen here, Senator Morndell! No thug can out man the Johnson!" He took a long puff of his cigar "As for you, Teddy Watch your back, kid! Crayons are traceable!"
You must log in or register to reply here.
Share:
Facebook Twitter Reddit Pinterest Tumblr WhatsApp Email Share Link
Top