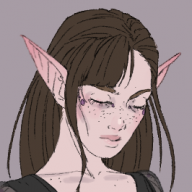 Clove didn't take long to find one of the few higher-ups in the Jedi order after the disasters on Dantooine and New Alderaan. She'd barely slept, was making mistakes in the medical bay, old wounds were reopening, and she couldn't concentrate on any lessons. All harsh reminders that she had lost control of not only her Jedi duties but also of herself.

"I am certain that I want to take the Barash Vow." Clove spoke to the Jedi while fiddling with her fingers. The Barash Vow wasn't the lightest; it was an oath in which the Jedi abstained from all Jedi Order-related activities and focused solely on the Force and themselves. It was a form of penance and, truth be told, a form of therapy in and of itself. "I made mistakes for which I want to take responsibility. And I'm clearly not in the right frame of mind." The half-Annfyn laughed quietly. "So I'd rather be put off-duty until I find back some inner peace and control." Altair's words echoed in her head, making her pause for a moment. "Until I'm Clove again."

She was on Kashyyyk when the bombs killed millions of Wookiees, she was there when the Sith fleet blocked the Dantooine sun and invaded the planet while failing to protect it, twice, and she might as well have been on Ajan Kloss thanks to Darth Raze. She'd seen bodies contorted to the point of no longer being humanoid, entrails scattered around rocks, and arms and legs detached in random fields. And that didn't even touch upon the constant fighting against her legs, no matter what she did. All before she had reached the age of adulthood on many planets.

Maybe there was no shame in taking that oath, taking a year or two off just to focus on her own mind. To avoid becoming like Severus or Byron.

She could meditate every day, continue her medical studies, albeit digitally, and focus on her legs without any pressure. And she knew where she was going to stay: Yavin 8. A planet she had grown to love thanks to Atias, one that held many secrets she wished to discover, such as the Melodies. A world where no one knew who she was because of some posters or a doll.

"Very well." The Jedi replied. "We appreciate your honesty. Feel free to go to your dorm room before you leave to get whatever you need. You are welcome to return once you feel ready and have served your penance."

"Thank you very much." Clove's voice softened as she rose to her feet. She needed to contact Crix (@Nefieslab), Elidan (@LouJoVi), Arctus(@Forsythe Crowholde) and Ruz (@SlagathorTheUnknown), send them a message, and let them know she'd be off duty. But she was sure they'd understand her decision. Knowing them, some of them may even support her choice. Plus, they were always welcome on Yavin 8! Even if they met as Jedi, they would always be her friends, Order or no Order.

Clove raised her head and made her way to her room, where her bags were waiting.