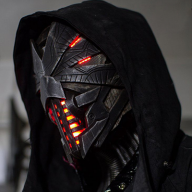 SPEED/MANEUVERABILITY
The Quad-Five express courier has a top speed of 100 MGLT and has decent maneuvering characteristics.


DESCRIPTION​
The Twilight Hour is a largely unmodified 5-555 Express Courier vessel, save for some paintwork. The hull plates have been darkened and her trim painted red to fit with both a Sith aesthetic and for practicality as a ship best not seen by those she stalks. Above she can be seen crossing the surface of Crait at excessive speed. One notable change is that her 'passenger' quarters have been converted into a prisoner brig. While not an armed vessel, the Twilight Hour is incredibly fast and can outrun even most starfighters. An R1-series astromech droid can be found in her cockpit at all times.


LEGALITY​
Legal. Star skiffs such as the Quad-Five are considered innocuous enough under most jurisdictions, and are not restricted in most systems.


INTENT​
To gradually arm the Twilight Hour, giving her an edge in combat against starfighters and small freighters that may wish to pursue or outrun her. To create one of the most versatile small ships in the galaxy, equally capable of subterfuge, scouting, tracking, combat and assassination. Based on the original writeup of the 5-555 "Quad-Five" Express Courier.