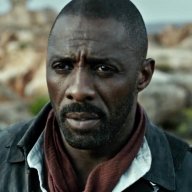 “Never open with dialogue,” the Ranger cautioned while liquor dripped from his lip beside levity. “It's a terrible start to the story. Really, you want to find the ending as quickly as possible, and sometimes you do that by saying nothing at all." He knocked back a shot and burped.

"Easiest way to put a crook behind barriers is to put a bolt in his noggin.” The glass thud upon the bar. “Can I get another drink and an OH YEAH!?”

Apart from the usual sounds fit for a cantina, with a hodgepodge of language and tongues and drinks to keep them flapping, a moment of silence ensued. Or is that...some kinda...static...some kinda...alien...static...

“I think you’ve had enough, bud,” the bartender cautioned. He looked neither amused nor amusing.

“Enough, eh?” The Ranger snorted. He sat that stool like it was a throne, liked he owned it—and the bar and its tender and the entire cantina and everyone in it. “Let me tell you something, bud.” He leaned forward, pulled his coat closer, exposed the blaster at his thigh. “It’s enough...when I kriffin SAY it's enough!"

The Ranger whipped out his blaster. The bartender backed up. There was a blaster shot. The man fell down. It wasn’t the bartender; he was still standing, staring from the stool to the shooter. “Nice shot.” The bartender nodded at the corpse slumped over the counter. “Clean bolt to the back of the head. Paid for that mistake. Shame he won't be paying his tab too…”

Just as the bartender sighed out his woes like a dead man dying another Ranger breathed in; booze and stale chips and the clarity of having just killed a crook. He rose from his table, pulled his coat closer, holstered the blaster at his thigh.

“Do, done, did,” the Ranger spoke with an uncontrolled shoulder, reaching the bar to request a whiskey. There was a stutter in his speech but his host heard him clearly enough.

“So, how does it feel, partner?” Bartender smiled as he poured and passed the glass.

“How does what feel?” Ranger knocked back the whiskey, set the glass down, raised a brow at the question and the twitch in his hand.

Bartender looked left, looked right, and there might have been a smile in one eye and a scowl in the other. “To have shot yourself in the head, of course.”

Ranger looked right, looked left. What...the… There he was, sitting on a stool right beside him: a mirror image of himself. The clothing, the body, the skin, the species—all of it identical. No... way… He pulled on the body’s shoulder so the living and the dead could meet face to face. The face...my face…my face...face...face...

“Tell me,” the other voice returned. “How does it feel to have killed yourself for the hundredth time, Zad Ruzed?”

“Where am I?”
The voice was weak, dry, empty, like it came from a head lying on a bed of sand. Might have been a fitting comparison considering the speaker was lying naked on a bed of sand.

“You are in the desert, Mr. Ruzed.” The other voice was close, distant; an echo that came from this way and that way all at once, and nowhere at all all the same.

“Are…” Zad fumbled. He wanted to say so much but, between not knowing what to say or how to say it, he could only say so much. “Are…”

Where… Where… He opened his eyes again. They had been closed again. Hadn’t they? He couldn’t remember. He did not know. Where...am...I…

The world was bright, first white then yellow, like a blinding sun transported in front of the pupil. He wanted to howl. He wanted to hurt. Yet, the only pain he felt was a tingle in his knees, then his hands, then his chest, until his forehead was some throbbing skull best left on a stick.

Mr. Ruzed. Why didn’t this bastard just call him Zad Ruzed? Zad Ruzed looked this way, spotted an endless sea of golden desert stretching into a hazy horizon. He looked the other way, spied a mirror image thought to be impossible, but such was the desert.

“Me?” The voice was suddenly casual, maybe mocking, like an interrogator breaking code to appear personable. “My O my, Mr. Ruzed, you really are lost in this desert, aren’t you?”

“That is the question, isn’t it? 'Who are you?' You are asking the right question...but in the wrong way.” The voice, the echo, everywhere and nowhere all at once. “The question, Zad Ruzed, is...who are you?”

Some people asked the question wanting to know what kind of person they were—really—like maybe they had just taken their first self-examination quiz, shot their sixth whiskey or shot their second skull.

You don’t ask the first time…

He remembered. No, he had a feeling. It was something different, something distant, like a shore so close on the horizon but so far away. It was that feeling you got when you could recall an event without seeing it take place.

The first time...the only question you ask...is…’Who’s next?’

Zad formed the killer's question like hard clay in a crippled hand, gazing up at the glassy blue sky, watching dreamy clouds drift lazily above a scolding, scoffing desert.

The sand was hot beneath his bare skin, and there was a warm breeze against his bare beard, but when he turned his head and glimpsed that faraway water, that ocean, that oasis, he could taste how cold it was.