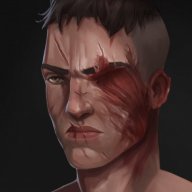 The room was dim, only the small piece of glass above the door let in any light from the hallway beyond. The wide open window led out to the pitch black darkness of the witching hour, a cool breeze creeping through the gap. The chill touched the side of Wodan’s face bringing out a wave of goose pimples across his cheek and neck. He reached up with his free hand, the sound of moving water echoed around the empty room.

The warmth from the bath water soothed the pimples on his neck for a time, before the water too became cold. Sighing Wodan’s hand dipped down under the water again, content to let the chill eat at his neck. His eyes were open and red, tired and strained as they looked up at the oak ceiling beams. Even in the dim light, his animalistic eyes adapted allowing him to easily make out the grain of the wood above him. Sleep rarely came to the Sith of late, haunted by visions of things from long ago, visions he had no right to see let alone understand their meaning and wisdom.

His right hand clutched as the shard which dangled from his neck, even in the warmth of the bath it still felt cold to touch. The sharp edges of the broken metal had cut into his hand time after time, to the point his palm was now a crisscross of silver scars, hastily mended by his quick healing. The scar tissue over time had become coarse and tough, the cold metal barely scratched its surface anymore.

Another night of restless sleep had summoned him to the bath, hoping the heat of the water would help relax the Firrerrian enough to slumber. But alas the bath was cooling and he was no closer to sleep than when he turned on the taps.

Letting out a breath, Wodan slipped down the bath, the chilled neck slowly becoming submerged by the warm water. Then his chin, his mouth, his nose, his eyes as he disappeared under the water's surface…

Through the clear water he watched bubbles slowly escape his lungs drifting to the surface, his mind drifting to death, his as well as the countless others he had taken or watched slip away. Were they now at peace? Their souls absorbed back into the endless ocean that is The Force as their bodies decomposed into the grounds they fell upon. Would Firrerre become a garden one day fed on the compost of his people's flesh? How many patches of vegetables had he provided fuel for in his time among the Sith?

Wodan felt his lungs begin to tense, the muscles around them fighting for oxygen. The last of the bubbles had finished there was nothing inside any more, he could feel the tension of self preservation tighten its grip around his body. Fighting an unseen battle against his mind which kept him below the surface. All warmth of the bath was gone, it felt like ice all around him, apart from the Shard, where it was once cold it now radiated a heat which grasped his attention with both hands.

Even as his body cried out for air, he stopped to look down at the broken piece of metal. Twisting and turning it within his fingers, a sharp point caught his index finger, splitting skin and a small pool of blood began to dissipate into the water around it. A cackle, a scream, a vision, a destination, a goal. All flashed into his mind in that moment, all at once and one after another. Wodan saw them all a thousand times in that split moment, his eyes wide, the golden orbs turning slowly sour at their sight.

The Firrerrian burst from beneath the water's surface, cascading waves of water over the side covering the floor around him. A deep breath was sucked in, a blissful experience for every organ, muscle and fibre of his body as oxygen once again found its way around his body.