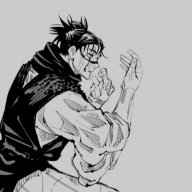 BIOGRAPHY
Born in Iridonia and taken by slavers when he was 6, the Zabrak who would be known in the future as Wulfric Crowholde led a destitute life before being rescued and taken as a founding by a male Mandalorian who longed to create his own clan. Wulfric is one of the founding members of Clan Crowholde, with his buir acting as the clan's alor.

Wulfric, along with those who have decided to take the vow and Creed of Mandalore, were trained ruthlessly by the alor, a Falleen adopted by the renowned Clan Vizsla. The alor, having found the young Zabrak decades after actualizing the desire to start a clan of his own, had decided to adopt the name of the Mandalorian (a foundling of Clan Vizsla) who had adopted him as his own.

Passing his verd'goten at the age of fourteen, the young Zabrak was tasked to help protect the clan before being a bounty hunter. Wulfric was patient and strictly followed the mission given to him, having been strictly raised in the Way. He developed the same traditionalist practice of the Creed as his adoptive father, and exercised the Way as religiously as the one who raised him.

Wulfric was thirty when he had taken a foundling of his own, an orphaned fifteen year-old female Dathomiri named Ilta. Upon discovering her Force-sensitivity, Wulfric pleaded to the alor for her to be granted access to her very own beskar'gam to better protect herself from those who sought her for her sorcery. While the appeal had been granted and the full cuirass crafted, Ilta was never able to wear the armor that identified her as a Mandalorian. She was killed by a hunter that had been tracking her down while accompanying Wulfric on a job at Jakku.

From then on, against his daughter's wishes, the Mandalorian Zabrak vowed to never adopt another child his perceived neglect might potentially kill.

Wulfric should have known that he could never deal in absolutes, however.

It was fifteen years after his first foundling's untimely death that he had come across an eighteen year-old Reiel in a backwater planet located in the Outer Rim – having first visited the planet when he was much younger (stopping for whatever supplies he could scrounge up, what with the state of the planet having practically no industrial cities nor major spaceports) and disposing of a small group of pirates who attempted to hijack his ship. Never had he thought that a bounty would lead him back to the skug hole, and eventually finding a teenager snooping about in his ship.

The kid was chatty, the complete opposite of Wulfric's foundling, but just as equally endearing. He liked her the moment she sassed him for leaving his ship's ramp open and the hunk of metal itself unguarded, looking absolutely unbothered with chastising a Mandalorian of his stature. Wulfric at first denied the request of the kid – Reiel Mal, he learned her name was – about hitching a ride with him offworld. But after experiencing such refreshing irreverence and witnessing a potential for marksmanship, the Mandalorian not-promised the human that he might return for her if she was worth remembering enough.

The kid – unsurprisingly – was rather unforgettable. To Wulfric, anyway.

And so months later, the Mandalorian found himself returning to the planet, teaching Reiel about combat and marksmanship. The two soon found themselves getting attached with each other, Wulfric seeing and treating the kid as his child and Reiel looking up to him as a father-figure. Soon enough, he found himself leaving the backwater planet with a new foundling in tow.

After accepting the Creed and having spoken the Vow of Adoption, the very short list of people having seen Wulfric's face grew by one addition. After losing his first adopted child, Wulfric became ruthless and unforgiving with his new child's training. He might have been harsh and cruel, but it was for Reiel's benefit (and, secretly, his – he could never bear losing another child again). But Wulfric never failed to show that he was ultimately soft for his daughter, too – providing more love and support for Reiel where his trainings appear almost needlessly gruelling and merciless.

During her training, Wulfric had approached the clan's armorer and discussed about the fate of his first foundling's beskar'gam. With the armor melted and repurposed for its new owner, the Mandalorian's love for his new daughter grew tenfold the moment Reiel told him that she would paint the new cuirass grey in honor of the sister she could've had.

Years of training and passing her verd'goten later, Reiel was now an additional provider for the clan by means of mercenary work. Still looking out for his child, Wulfric sometimes shared hunts with Reiel and oftentimes became her mode of transport in between jobs whenever he could – what with Reiel unable to find the perfect ship for herself as of yet.


Personality, Skills, and Abilities
Wulfric is both highly proficient in the arts of combat and weapons expertise. Years of fighting and hunting down bounties have made him an excellent tracker and strategist. He is an above-average pilot, but still struggles when it comes to ship (and even droid) repairs. What goes beyond him, however, is crafting beskar and teaching academics to foundlings – something he can do but has virtually no patience for both. He makes for a decent medic, but flounders at the prospect of attempting major surgeries, often leaving the treatment of mortal wounds to experts.

Wulfric is a gruff and taciturn individual, often letting his actions speak for himself. He doesn't speak unless spoken to, and more often than not will he opt to disregard those who attempts to engage him in meaningless chatter. Small talks bore him, but not when Reiel is the one prompting for such conversations. He has a mean streak towards outsiders but is more than a hundred percent soft towards his daughter (but only when they're in the privacy of their living quarters in the covert and his ship – he has a reputation he would rather not ruined). Despite his job as a bounty hunter Wulfric has a kindness in him, only hidden by years of witnessing how people can be needlessly cruel towards one another.

While he displays distrust towards both the Jedi and the Sith, Wulfric has learned to curb it with regards to Force-sensitive younglings. Any Force-sensitive way past their youngling years are exempted from the kindness he is willing to give children, however (another exemption being his first foundling, a fifteen year-old Dathomiri Force-sensitive).

Wulfric is strictly loyal to his daughter, the clan, and the clan's trusted allies (other Mandalorians and their clan), and values honor and family more than he's willing to admit.

Intent:
To provide Reiel with transport for travelling from planet to planet until she has procured her own ship. Wulfric also serves to provide supplies and information to Reiel (and as a reminder for the latter that she has someone to return to).
Last edited: Wednesday at 9:57 PM
You must log in or register to reply here.
Share:
Facebook Twitter Reddit Pinterest Tumblr WhatsApp Email Share Link
Top