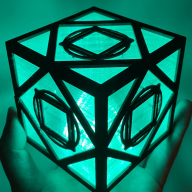 THE REDOUBT STATION WAS a bleak and miserable place, not exactly a holiday destination, truth be told. Yet it was popular all the same, just with a different sort of people. Adventurers, soldiers of fortune, and just about everything in between - because the Redoubt was also the last objective within civilised space, before one headed to the Unknown Regions. Over the course of its long and storied history, few people had ever returned from venturing into the Unknown Regions, but those who had would see their lives changed forever, fame, fortune and no small amount of glory following in their wake.

It was why the Redoubt had been chosen as their meeting place for today, the last vestige of civilized space some on this trip would ever see.

Standing in docking bay three-sixteen, a humanoid protocol unit, chromium polished to a sheen would be found, its chestplate adorned with an absurdly ornate sigil, two serpent-like creatures rampant. It was staring at a large ship, and LXE Astrogation Vessel, as if in deep thought. The Droid seemed to pay little to no heed to the six heavily armoured, and liveried men dotted about it, standing to attention, their chest plates adorned with the same sigil. For a newcomer, it would present a strange sight indeed.

All seven of the individuals made up a tiny percentage of the Household Auxillia of the ‘House Praji’, a Core World Noble House of considerable fame and influence. Rumour had it on the Redoubt that it had been their leader, Count Hajan Praji himself, who was sponsoring the expedition, and that was why he had sent down six enforcers to clear the bay, and make it ready for his adventurers.

The Droid new, different, and almost subconsciously glanded up into the ship itself, before thinking better. It waited, indeed, it spent a lot of its time waiting.

It waited for the company to arrive.

OOC: Welcome to the first thread of our adventure, with me, @Nor’baal as your DM. There will be no dice this round, so, come and make your introductions, and let's get rolling! 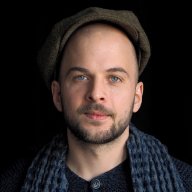 Milash had been at docking bay 3-16 for some time now. Having awkwardly presented his credentials to the Praji troops, he'd been milling about some time now as he waited for the others to arrive. Doffing his cap to the soldiers and the droid, he'd begun to have a look about the LXE Astrogation Vessel.

The vessel was far grander and newer than any e'd worked on until now. His families rickety rocket had barely kept them together at all, and the pods he'd been servicing and shaping up until now were a mite smaller by comparison. He hadn't lied on his application, that would be saying too much. But, he perhaps had failed to refer to those podracers as such, and perhaps merely described engines being serviced for many years.

Not that he couldn't do it, he could do it. He could do this. He had to now, he'd spent much of his savings just getting transit to the edge of space where he was now to join the expedition.

As Milash scanned the exterior of the ship, he scrambled awkwardly up scaffolding as he ran his hand along the Durasteel hull, pressing his ear to it to listen to the hum of its electrics, the purring of its engine as it sat idling,

"Well, well, well, we're going to take good care of you" he whispered under his breath to the towering vessel. This was going to be his new home, and he couldn't wait. Though what his new crew would be like was another question entirely. 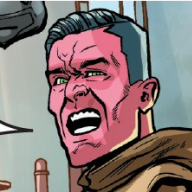 "Welcome, Mr Harlan-" one of Count Praji's enforcer said as he handed Jahn back his credentials. The Zeltron felt the disdain the enforcer held for him and the jealousy as well. Who was he to join such a prestigious expedition besides a rich kid who had failed at being a racer. His crash on Nar Shaddaa had him in a bacta tank for a full week and then in excessive treatment for another month. The Hutts hadn't agreed to treat him on credit, so he had to sell his ship to cover the costs. After that.. his mother refused to buy him a new one and said he'd ought to find a job for once in his spoiled life.

Ofcourse Jahn wasn't going to take just any job and a week later he convinced his mother to pull some corporate strings and get him a bed on this expedition. Was it a smart move? Probably not, but it would most likely not be boring.

Spotting a human admiring the ship like some poor pleb, Jahn walked over to him with his typical rich Zeltron arrogance and greeted him with a wave before extending his hand. "Jahn Harlan, you one of the techs?"

Hearing the voice of another enter, Milash looked down to spot a Zeltron who had made his way over to the ship as well. Presumably another part of the epxedition, Milash stuck out his hand and grabbed a hold of Jahn's, shaking it vigorously as he replied,

"Yes, yes, that is ah, yes, me, Milash, Milash Herren, I'm looking forward to getting onboard. Your name would be?" he spoke fast and awkwardly, but his enthusiasm would be clear, if not necessarily appreciated by the Zeltron that stood with him. He wanted to make a good impression, but had never met a Zeltron before, and well, he didn't necessarily think himself the best at introductions anyhow. And even with all the enforcers about, he still felt particularly small and vulnerable in the towering hangar bay around him, their silence only adding to it.

"This is not a ship type I've been aboard before" he laughed quietly at the admission "but I'm sure I'll be able to figure out all the kinks" he said elbowing the metal of the ship, the noise echoing through its hull and out into the hangar bay where it reverberated even further.

He did not feel this was going well on his end. Surely others would be arriving soon. 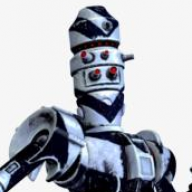 Xioxi clanked his way towards the ship, carrying nothing but his pistol, his longblaster, and his thermal detonator. He doubted he'd need anything else. The application had been clear.

He didn't doubt why he had been chosen. A deadly, powerful droid like him? Still, he had hesitated to accept...He had some revenge to take care of before he died. Guess that just meant he couldn't get killed. Can droids shrug?

He spotted the two on the far side of the vessel, ignoring them in classic Xioxi fashion. He was there for the adventure, not the people. He surveyed his new home for the next who knows how long; it looked good to him.

Jahn frowned at the human, "I just told you my name," somehow he and this human didn't seem to be speaking the same language and seeing as they'd be spending a lot of time together Jahn felt thoroughly disappointed. "Shouldn't highlight your inexperience. Doubt those gunslingers appreciate it."

He was lucky. Jahn wasn't part of this expedition because he had some kind of skill or experience to contribute to the mission. His mother's company had plenty of credits and she wanted him to amount to.. something other than a partying spice addict. Kriff. Being out in the Unknown Regions certainly did that.

Maybe Milash and he would discover something new or ancient. Something they could sell and get rich off. Or maybe they'd run into that Dark Lord of the Sith and his followers and die horribly. Either way.. probably better than standing around here waiting.
@Nightfall 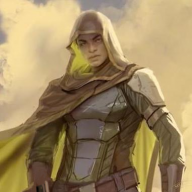 Another day, another ship. By now he was used to it travelling with new crew though this wasn't joining a crew to hitch a ride to the next system, This was an expedition they didn't how long they would be out there or if they would come back at all, though with how things were going in the rest of galaxy that might a good thing.

Rezyl approached the two humanoids from behind with a duffle bag over his shoulder, his blaster strapped to his hip and his cloak hood up.