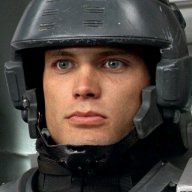 APPEARANCE:
Zan is short and physically unremarkable. He has brown hair and eyes and an unshaven face. He tries to keep a low profile, wearing only a simple blast vest for protection underneath his brown duster.

ATTRIBUTES:
Physically Zan is very scrawny and unimpressive. While he knows how to fight, it’s not something he rushes into as anything other than a last resort. His greatest asset is his mind and his mouth, preferring to talk rather than shoot. He has a naturally magnetic personality, finding it easy to make friends, or to trick people into thinking he’s their friend. While he is a criminal, he holds to a very specific code that he feels preserves his honor if only somewhat. The most important aspect of this code is keeping to one’s word, and not betraying his employers.

PERSONALITY:
Zan is witty and charismatic, always quick to try and defuse dangerous situations with a joke. He can also be very cunning and manipulative when he needs to be. He generally behaves in a friendly and lighthearted manner, but will ruthlessly pursue his goals when the situation demands it. He maintains a close kinship with his best friend Zap, whom he would be willing to do anything for. All of this of course is a front to a certain degree. Privately Zan is very self-loathing and is haunted by the feeling that his criminal lifestyle is a betrayal to his father.

BIOGRAPHY:
Zan was born on Abregado-rae in 110 ABY. His father was a starship mechanic working in the capital spaceport, and his mother a waitress at one of the local cantinas. Their family was very poor, and while his father took him on as an apprentice mechanic, Zan spent most of his time getting into trouble. As a young boy he listened to many of the tales of travelling smugglers, bounty hunters and other spacers. He became enamored with the idea of one day traveling the galaxy himself. From these people he learned how to shoot a blaster, how to play cards (cheat more accurately), how to pick pockets and locks. And most importantly, how to talk his way out of trouble. Zan was small and weak and had to learn how to use his head to get out of the situations his delinquency often got him into. Smart mouthed and silver tongued, he quickly found he had a natural talent for persuasion and manipulation.

As a teenager he became friends with a Moocher named Zap, and the two quickly became inseparable. Zan taught the small alien some of his thieving skills, and Zap immediately taught those skills to the rest of the local Moocher den. Soon a small army of Moochers was picking the pockets of Zan’s entire neighborhood, becoming quite the nuisance. As thanks for his help, the Moochers gave Zan a small percentage of their spoils, which turned out to be quite the significant sum. Thinking his parents would be overjoyed they could finally move out of the slums Zan brought his ill-gotten gains to his father, only to be lambasted for his criminal behavior. His father viewed an honest living as more important than wealth and insisted Zan return the money at once. From that point forward he watched the boy extremely closely, refusing to let him associate with Zap or any shifty looking folks, and forcing him to focus on his mechanic training. Zan begrudgingly acquiesced, pouring all his time and effort into real work and eventually getting his own job at the spaceport. Even though the job was enough for Zan to get by, he still felt unhappy.

In 130 ABY Zan’s father fell ill and died shortly after, with his last words begging his son to keep to the straight and narrow. Zan vowed to abide by his final wishes, but not long afterwards would be forced to break that vow. When the Veizen fever swept through the capital spaceport the government sanctioned the extermination of the local Moocher dens to avoid them going mad from the infection and causing havoc. Zap returned to Zan to ask for help, and Zan felt he had no choice but to aid his old friend. With the help of some smuggler friends Zan was able to steal the Port Master’s personal yacht and use it to relocate Zap’s den to the nearby planet Atzerri, where they would be safe. Now a wanted man Zan couldn’t return home and resolved to become a fulltime freelance spacer. Despite his desire to keep his word to his father, he quickly fell in with the galaxy’s criminal elements once again. Even so he maintains his connections on Abregado-rae, through which he sends a steady stream of credits to his mother.

SKILLS:
While not very useful in a brawl Zan’s upbringing has armed him with all the skills needed to be the perfect scoundrel. He likes to consider himself the quickest draw in his home system, and while that may not be true, he remains very skilled with a blaster pistol. In addition to this he has a good eye for detail, able to read someone’s body language to tell if a fight is about to start. He is a skilled pickpocket and slicer, and through his father’s training has an in-depth knowledge of starcraft and how to pilot them. He’s also good at keeping a cool head under pressure and finding the right words to persuade or mislead those he’s facing down.

I'm aware the Veizen fever is Legends material, as well as the specific regime that supported killing the Moochers. I figured since canon doesn't specifically contradict it the backstory is still viable. If it's a problem I'll make the necessary changes.

Although you should consider paragraph spacing for you Bio. It makes it hard rather to read (I had to C+P to wordpad and space it on there)

Although you should consider paragraph spacing for you Bio. It makes it hard rather to read (I had to C+P to wordpad and space it on there)
Click to expand...