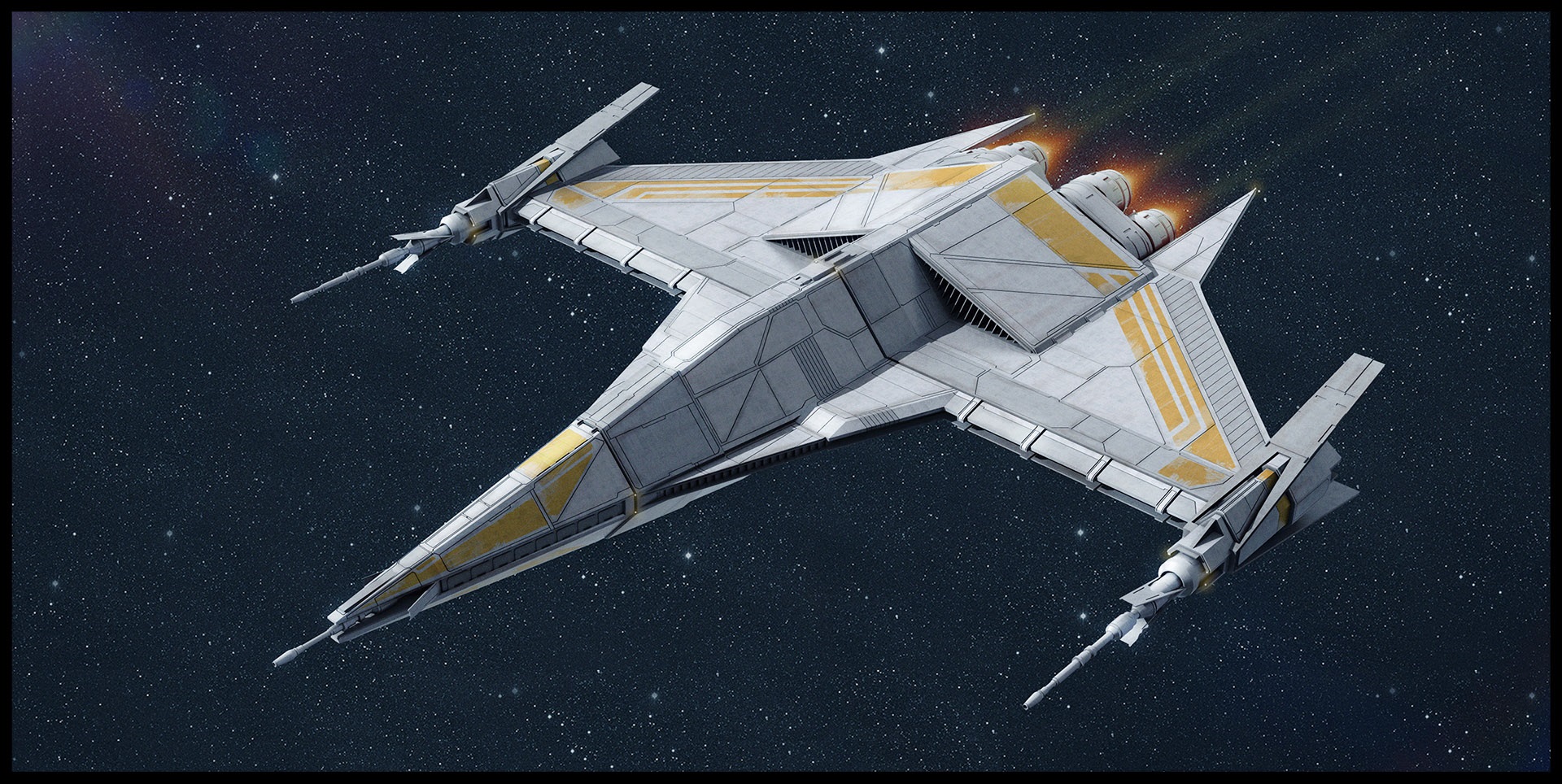 
DESCRIPTION​
The CT-O auto-pursuit starfighter is a droid combat craft developed and produced by a partnership between the droid-maker Cybot Galactica and starship manufacturer Tykannin Drive. Marketed as a security solution for long-haul freight and passenger lines looking to avoid pirate attacks, the CT-O has many of the same capabilities as a crewed starfighter, but without the added expense of having to pay an organic pilot.

CT-Os are capable vessels on paper, with a top speed of 110 MGLT, excellent maneuverability, a class 2 hyperdrive and even a deflector shield. Armament consists of a trio of medium ion cannons; as the ship is a droid starfighter, it was thought appropriate by Cybot-Tykannin to limit the factory offensive load to non-lethal weaponry. Some more vindictive owners will fit proper laser cannons in their place, however, although this voids the warranty and runs the risk of legal trouble on certain planets.

Notably, as it is designed for convoy escort, the CT-O is equipped with consumables sufficient for up to a week in space. It can also carry some 500 kilograms of cargo.

The CT-O's databrain is a relatively sophisticated model, making it easily the most capable droid starfighter since the Clone Wars. Although it still has some of the same shortcomings that afflict other combat droids - namely, a certain predictability and lack of adaptability in combat - the CT-O droid brain is considered only a small step below average organic pilots in most circumstances. Like most droids, they can also learn new skills and develop new traits over time if not subjected to regular memory wipes or destroyed; this is somewhat more likely in CT-Os than in many other droid starfighters, as - unlike many of their predecessors - they are designed to be long-serving and durable, rather than simple cannon fodder. Rather than simple swarm tactics, CT-Os use more conventional starfighter maneuvers in combat, making them easier to integrate with command structures intended for organics.

CT-Os are also designed to use the same general infrastructure as other starfighters, albeit without the need to support an organic pilot. They can use standard hangars and docking points, allowing them to latch onto larger ships for transit and refueling if necessary, although their integrated hyperdrive and large consumable reserves make this largely unecessary.


LEGALITY​
Restricted. CT-Os, as automated starfighters, are subject to certain legal restrictions and licensing requirements on most worlds.


INTENT​
To create a modernized droid starfighter and low-cost convoy escort, primarily to give pirates something to cut their teeth on.