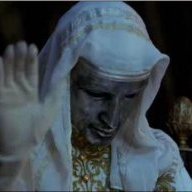 The life of a bounty hunter is not for the stupid and foolhardy. A quick blaster can save your life, but making sure you're wearing some good armor is just a smart insurance policy. In the case of the bounty hunter Maro Baize, his armor is just that. A means of protecting himself while on the job, and in places where it counts obscuring his identity when on the hunt.

All the pieces of the armor are legal, although his use of it might be questioned in the more "civilized societies" where coming in armored would be crass. As such in full armor he would likely be restricted in places such as Alderaan, Naboo, ect. and government buildings would not necessarily be happy with him wearing his helmet to obscure his face.

To both give a visualization of Maro's armor, as well as to provide a handy means of understanding his equipment in rp.