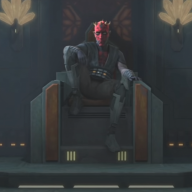 "I agree," Cassus replied, nodding his head, "These lunatics just might have something worth our time." Cassus turned to the hooded disciples, this time with an expression of respect masking over him. He would offer a bow to them.

"We would be honored if we were to meet this Master himself," proclaimed Cassus. The disciples looked at each other, whispering in hushed voices, as if they were considering it. After a few moment, the Twi'lek stood forward.

"Very well," the Twi'lek said with a nod. "Follow." The Twi'lek would led them through the long halls. It seemed like forever, but soon they finally reached a large, inner chamber. It was lit by large, fiery torches. You could see numerous artifacts and treasures laying around. Up on the top of the steps stood a man, an aging man. The Twi'lek, followed by the other disciples, would bow respectfully.

"Master," said the Twi'lek, "We've brought the disciples you wished for." 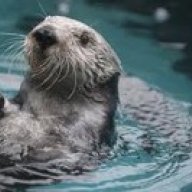 "Indeed you have," the elder man said, quietly, though his voice easily carried throughout the room. His age was easily evident, unlike what one might see on some masters of other orders; he did not go through the deception of illusion, preferring instead for those about him to see him for what he was. And in his eyes, one could see what knowledge - and power - he held.

He walked down the steps, each measured tread of his slow and stately, betraying nothing but the control he held over himself - his body, his emotions, everything. His eyes never once strayed from those of the two acolytes who stood before him as he walked down, even as his various disciples came down from their bows onto one knee as he passed. He held no weapon on his person but the Force within him, and Cassus and Jaron both would sense the strength of it.

As he descended the last step, he stopped, now a mere meter or so from Jaron and Cassus, his gaze falling severely upon them. He lifted an arm, the cloth of his thick, black-bordered maroon robes slowly following the movement as he beckoned Jaron and Cassus forwards. As the pair started to move towards him, he spoke again.

"Your names, disciples," he said, his voice ringing out again through the room. "We must, after all, observe the pleasantries." His tone held steel within it, giving the two acolytes before him the knowledge that he would brook no argument or disrespect from them; and that if they weren't going to give him their names, they would soon find their names in his possession without their consent.

Jaron kept his face impassive, his eyes averted from the man. He could feel it, and he knew Cassus could as well; that this man held more strength in the Force than the both of them combined, and he obviously had training enough to use the power. "Jaron, sir," the Keshiri said, reluctant to address this man as master; and, thankfully, the man did not take umbrage at that. "As I said earlier, I was not aware that we were expected."

Cassus would look on this elderly man and his disciples, masking his puzzled expression with an emotionless one. This was not normal. Not at all. Even if they were mad, it wasn't usual behavior. Perhaps they were possessed? Or maybe they were runaways, outcasts. Something! What are you? Cassus thought to himself. They were certainly not of the Imperium, that much was true. Were they even Sith? As the man grew closer, the acolyte got chilled as he felt the man's overwhelming power in the Force, much more powerful than Jaron or himself. As he heard the old man ask for their names, he quickly pulled himself out of his thoughts.

"Cassus," he would reply in a respectful tone. To be in the man's very presence was both astonishing and terrifying. He was clearly not one to provoke. They had to act carefully.

"Jaron, Cassus," the man said, nodding to each of them as he repeated their names, as though committing them to memory. He lifted his arm then, sweeping it about the room - an expansive gesture, taking in every last article there. As Jaron followed the motion, the old man smiled.

"You two weren't exactly...specifically accepted. We knew that two new learners would be coming, though we knew not whom; ah, but the Force showed me men similar in appearance to you two; I can only imagine that any discrepancy is due only to the mutability of the dream in which I saw you." The man turned aside, moving to one of the small items on the wall, a small vase. Running one finger along it, slowly, he began to speak again.

"Yes, we knew two learners would be coming...but you are Sith, are you not? Ah, not full Sith, I see that now; yet I recognize that your loyalties lie elsewhere than with me, and the one we follow." He smiled, bitterly, as the various disciples about him gasped, their eyes shooting to Jaron and Cassus.

"Come back when you learn the true folly of following those that you do," he growled quietly to the two acolytes. "I sense the knowledge of self-reliance within the both of you, as within all Sith, Jedi, or others...but I also sense that your loyalties lie to other things than just the Force, and your power with it. No, there is little for you to learn here...but in time, perhaps you will learn much, and you likely won't need the help of such of me. Go, the both of you; I have others to teach."
You must log in or register to reply here.
Share:
Facebook Twitter Reddit Pinterest Tumblr WhatsApp Email Link
Top