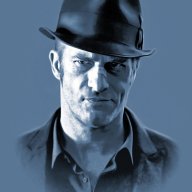 BIOGRAPHY
Aran was born and raised on Poyl. He never met his mother, she died before he could remember anything about her, and so his father was his sole guardian. Wilhuff Brishad (named after the heroic Moff Tarkin himself) was an engineer, mainly engaged with ground vehicle repairs and renovation. They lived just over the garage and so from the start Aran was surrounded with tools. He would often help father with his work, even though he wasn’t very interested with the vehicles themselves. The garage was equipped with basic lifts and in order to help his father out, Aran would start to learn about robotics and mechanics. He wanted to create robotic arms and other convenient appliances for his aging father. He was able to create two or three basic devices until he reached seventeen.

At this age almost every able-bodied man was conscripted into a mandatory military service. Aran went through the one year long basic training after which the competence review took place and he was placed into a sapper and demolition squad. In some parts of the planet, military grade munitions could still be found on daily basis. Most of them were uncovered when reclamation works were taking place in cities abandoned after the Clone Wars. The next four years were filled with either tension filled disarm operation or munitions repurposing and manufacturing. In the army Aran would meet his friend Berit, who was a fellow robotics engineer and would often accompany the reclamation forces in search of CIS droids uncovered during the works. Aran would often help Berit with his findings, trying to make them function and sometimes uncover some history behind the units, embedded in their memory banks. They were able to complete more than ten such projects before their mandatory service was over.

They both decided to join the police force in Lita, Aran being reluctant to join his father in the garage due to sheer boredom it accompanied after risking his life almost every day with demolition work. Berit on the other hand was following his family’s history of police service, like his father and grandfather before him. Over the years Aran would take part in drug busts and murder investigations, shifting from unit to unit. By the time he made detective, Aran has already experienced the injustices that happened due to flaws and loopholes in justice system of Lita. He was pretty vocal about these occurrences, to the displeasure of his superiors. One time he would even throw a fit with chairs and tables flying after a particularly nasty individual walked free due to evidence mismanagement. For this reason he was placed as a detective inside the Internal Affairs unit, a banishment and tempering action for his behavior.

He would investigate former colleagues, go over the evidence chain of custody and generally create an illusion of corruption management over the police force. By this time Berit became a detective inside the Counter Smuggling unit and also grew a little disenfranchised with the police force. He would one day bust a shipment of five hundred military grade blaster carbines, a rare sight on Poyl and a dangerous weapons specifically on this planet. Neither military equipment nor police was equipped with protective gear for these kinds of weapons, because they were so rare. Those same weapons would disappear from the police storage next week and both Berit and his father would be found shot dead from close proximity in his apartment the next day. Aran wouldn’t be the one to investigate. The case was left unsolved but closed due to lack of evidence, so Aran decided to take matters into his own hands.

He was able to collect evidence from Berit’s private information storage units placed inside a home service droid in the apartment. Some information could also be extracted from a smashed terminal belonging to Berit, but Aran was reluctant to ask for help. He managed to get his hands on police slicing techniques handbook and after two years of private investigation would be able to uncover some details from the terminal. The combined clues would lead him to a private security contractor who was working for one the top UPN (United Polyarr Nations) from notoriously corrupt city-state of Ruten. Seeing the scale of the case, Aran decided to collect evidence that would prove without doubt the involvement of these men and during this process he uncovered more shady business conducted by the people in question, from unlawful trade of munitions to espionage. During the investigation blackmail was his most effective tool. When that didn’t work, he had to resort to torture, wasn’t pretty or in accordance to law but was really effective. At least three people would be scarred for life as a result.

In the end Aran was able to schedule a meeting with one of Lita UPN representatives and presented the gathered evidence. As a result seventeen people were arrested including the private contractor. The Ruten representative evaded justice however by means of connections and other loopholes, which found that he was unaware or not directly responsible for the actions of his subordinate. Aran in the meantime was held in the custody of FWA (Free Worlds Alliance) diplomatic detachment, to prevent contact from possibly dangerous interested factions. Aran was banished from the planet as a result of the deal between the city-states which was to prevent further diplomatic backlashes.


Personality
Aran is an idealist turned pessimist. Earlier in his life he believed in inherent fairness of the world. As taught to him by his father, no society is able to survive if in its smallest units, individual people there is no compassion or empathy for other beings. By definition this meant that the higher one would climb in the society, the stronger he would understand other people and step up to take care of his brethren. There was logic in this worldview for younger Aran, as there was no other reason (yet) in his comprehension why anybody would want to do the tedious work of ruling others.

The time in the police force and more cynical and pessimistic people in his life, such as his best friend and partner, changed his view, as he saw more injustices and harm done in the name of greed ambition across the years. More than once he was ordered to look the other way as the criminals with important connections were set free and continued to benefit from the flawed individuals in the political and justice system. Aran grew more and more discontent with the police force and his father’s ideals. The law which was supposed to protect the citizens and correct injustice, instead gave legitimacy to the top criminals on the planet.

Aran was never religious. His father taught him the humanist principle of shaping the world by his actions and intentions. It’s fair to say he believes in capabilities of people to do good and evil alike. This view was parallel to the religious teachings on Poyl, absent of the higher power watching or intervening. For this reason, he was never met with ostracism for his beliefs.

All Kenaz were raised under the imperial flag. It was a symbol of bravery and opposition to chaos brought by disenfranchised parties of the previous regime. Born and raised on Poyl, Aran believes what he was taught all his life. The Empire was an inherently just government and any violence by the imperial forces was done in defense or retaliation to the warmongering Rebels. Lately, as his worldview grows more distant from idealism, Aran starts to question the values of The Empire. From an authoritarian belief system, he is shifting toward individualism, as the government and rulers failed him times before.


Skills
Aran is an experienced shooter with a pistols, as he was using these types of weapons in the police force exclusively. He is less proficient with carbines, finishing the mandatory training in the army and several police courses. He trained hand-to-hand combat in both formations and is well versed with use of stun batons and knives. Being recruited into the sapper and demolitions squad in the army, Aran is an expert in handling and use of explosives such as mines, breaching charges etc. The use of grenades is not foreign to him.

Aran has never operated a droid but has an advanced knowhow of mechanical, electrical and software design of simple units. He is proficient with munitions, be it manufacturing of military grade explosives, to mechanical design of weapons and armor. Being born on Poyl however he has but basic familiarity with designs of blasters and lasers.

Aran has an intermediate computer skills, being able to slice or hack everything other than military grade tech. He has never flown a starship before, certainly not piloted one. Aran has used groundcars all his life and is not experienced with speeder operation.