As the Trandoshan came out of a nearby hatch, having been listening and watching for something to pop up, I turned moved to put the hatch between us. Giving me some protection for a bit, taking out my pistol I aimed and fired two shots directed at the Trandoshan, the large blue ring growing as it got closer to it. Once the creature had been knocked out I noticed that the hatch it came from was closed.

I looked to Elara, and felt as though I was a parent with a scared child. Pulling out a concussion grenade I threw it to her softly. Right now we need to get in there quickly and then get everyone on the ground quickly before it turned into a full gun fight.

"Throw it down this hatch, set it to detonate on impact then slam the hatch closed." Once she nodded or gave some sort of affirmation I would take the rifle that was slung on my back off, right now I wasn't sure how well armed Elara was but I figured I should give her some more weapon's just in case.

"Use this." After she had did what I asked I would hand her the pistol if she didn't already have one, and after the detonation of the concussion grenade, I would swing open the hatch and looked down into the rafters.

I saw two more criminals that were coming up, clearly trying to ambush us while the Trandoshan was suppose to keep our attention. I blasted them both with stun bolts from my rifle, keeping it on stun mode and then closed the hatch. Right now the criminals were all heading to the roof to fight us, and considering there was no cover here this was the wrong place to be now.

"Hold on tight." I slung the rifle again only to run up to Elara and grab her flying off the roof and towards the front of the warehouse.

I could only hope Elara didn't fight me as we flew because that would definitely make things more difficult if she did, but we had to move if we want to survive.
Last edited: Aug 25, 2020

The Devaronian listened to the stunning fire, and concussion grenades going off. He'd been on the receiving end of one too many raids for this sound to be unfamiliar. Cycling up the power of the repeater, allowing the chamber’s to build up a reservoir of charge. He nodded to the pink female. “Well, it would appear that we are gonna be needed here.”

A few more hatches gave way as more thugs and trigger men rose upon the roof. One, a female Rodian began tending to the stunned Trandoshan. As their assailant jetpack away from the roof, a hail of blaster fire trailed catching up on their trajectory. Downstairs, the Devaronian roared eagerly, hearing the pack ping with a full charge. He heard the jetpack cycling down towards the front of the building, the large access door in between the Ranger boys and him. He turned the gun and began firing on full auto into the plasteel door busting the chains and locks. The compression systems fired and the door began to slide open the drum mag allowing the fire to continue hosing to cover all angles in a cone of fire. “Alright Ranger boys, you wanna fight! Let’s fight!”

In its coffin of a crate, the systems within clicked, whirred and cycled. Memories were being compressed for storage and diagnostics ran simple checks on the vial systems in their regular cycle.

"Throw it down this hatch, set it to detonate on impact then slam the hatch closed."

Elara blurted out a quick "sure" before doing so immediately as soon as she catches the concussion grenade, without hesitation. She was trained enough that she knew what it was and how to handle them, at least. She also was aware how inexperienced she must look, but it didn't matter at this instant. But when the man gave her another pistol, she shakes her head and gives it back, unsheathing her own.

She keeps it brief, there was no time to lose to explain things. Her training did not cover holding two weapons. She barely had time to witness the armored man taking out two more guards before he grabs he, she hangs onto his neck with one arm as tight as she can while holding onto her blaster with the other, and they fly back towards the main entrance. The sound of blasters echos behind her, and she had to swallow hard. The man probably saved her life twice now.

Trying to shake off her adrenaline and fear, she rushes to the side of the open main door to take cover, just in time because the Devaronian taunts them as he starts spraying blaster fire. Elara waits for a break in the fire, before gesturing to the man to join her and getting a few shots of her own. One shot narrowly misses the Devaronian's arm that's holding his weapon, the rest spray around him. Not sure what he was planning, but he was definitely better prepared for such a fire. Still, Elara was going to do her best to cover him for whatever he was planning to do. 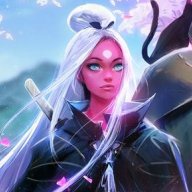 .
Nima was pissed that the Devaronian began to destroy the small cover that they had, but she had no time to yell. She quickly ignited her lightsaber, a loud crackling noise could be heard for just a moment as the surrounding area would be filled with a purple glow. Then, Nima used the force to throw the Devaronian to the back of the warehouse while she attempted to block as many blaster bolts she could that were aimed at him. Nima would make her way to the back of the warehouse while blocking any blaster bolts that were directed towards her, and she soon found cover behind some crates near the Devaronian. She quickly glared at the man and said "Back door of the warehouse, now. If you die I will make sure you are revived so I can kill you again. I'll get the crate."


As she was about to exit from her cover to retrieve the large crate, Nima noticed the crate shaking a tiny bit. It didn't seem to make sense as the ground was not shaking, nor could the blaster bolts have caused it. Was there a bomb inside? She had no time to figure out as the two attackers seemed to make their move again.

He was snagged back with immense force, there was no grenade... he was pulled! He kept a firm grip depressing the trigger. Shots flew through the door into the ceiling, crates, everywhere. With a crunch he landed hard, his shoulder clawed pain into the back of his mind.

The shot hit the lare crate, punctured the wall and spanked off something metal inside. Immediately systems began to activate. Motor functions, audio and visual analysis began to comeback positive and the matrices analysed the data; he was in a crate. Slowly but surely the confine's spacing was established and a few hard taps dislodged the lid. Rising at the waist, a droid appeared, yellow ocular sensors panning around the warehouse that was alive with quite violent activity. "My goodness..." a trim, clipped accent, similar to Eriaduan emitted in perfect Basic. "...it would appear that I am in a situation. What is going on? Where is my mistress?"
Last edited: Wednesday at 1:04 PM
You must log in or register to reply here.
Share:
Facebook Twitter Reddit Pinterest Tumblr WhatsApp Email Link
Top