Ask Yavin IV Catching Up With An Old Friend 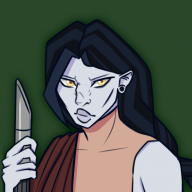 Jaesa wasn't exactly found as a young child. If anything, her caretakers had spotted a wandering Jedi and specifically approached him about taking her. "The child," they told him, "breaks things when she throws tantrums." They feared for the safety of the other children, so Jaesa was sent back to Ajan Kloss with the Jedi to live at the Jedi temple. This was good. She had migrated from an orphanage that could only allot her so much care, to a temple full of Jedi who were interested in her well-being. Though in the current days Jaesa wishes she had known her family, people or planet, she is eternally grateful for the Jedi. In particular, one specific Jedi, who had received her from the orphanage and brought her home.

Yvain was an old friend and a sort-of father figure to Jaesa, and someone the knight had always looked up (metaphorically) to. So, as friends do, she liked to stop by every once in a while to catch up with him. The little green Jedi was often off-world, so today was a rare chance to catch him before he returned to whatever he did off Yavin IV.

"Yvain?" Jaesa knocked three times on the door of his private quarters. She wasn't entirely sure if he was in at the moment, but she had a feeling he was. 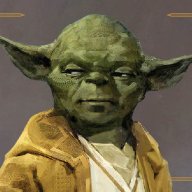 Yvain enjoyed his time on Yavin, it was quiet and peaceful compared to the rush and frantic nature of the galaxy at large. It was here he had his garden, his food and his close friends, the Old Jedi had only begun to spend more time around the Order proper over the past year or so, but he seemed to make fast friends with those who liked to talk of the Old Order.

He was standing on a small table next to a round oval window, the breeze from the jungle outside flowing in. Watering can in hand the little green Jedi whistled as he tended to three little plants that sat in the Yavin sun. A small knock at the door signalled that the presence he felt through The Force had given themselves the courage or desire to enter. With a flick of his left wrist the door unlocked allowing the Jedi Knight to walk through. "Good Day Jaesa." Yvain said, his back still turned to the door as he continued watering his plants.

"Greetings, Yvain." The young woman stopped to remove her shoes before entering into Yvain's home. Her eyes wandered to the plants being watered, and then to the Jedi with his back turned to her. As a child she had loved to hear his stories of the Old Order, in a time when the Jedi were a prominent force in the galaxy. Stories of the massive temple on Coruscant, stories of the grand starfleet battles of the Clone Wars, stories of his travels... they still interested her to this day, but she had less time to do so now. She would say, with how long the Jedi had been around, it was strange to her that he was not yet a Jedi Master.

"How have you been?" It had been a minute since the two had last spoken, as she had been gone from Yavin IV until recently.

Yvain finished watering the final plant placing the little can down next to the plant pot. Turning to the young women he smiled, "Days have been warm, the plants have been going well. As have I. How have you been? Have you been keeping up with your training?" It was the standard question one would expect of their former master. "Also how is your sapling?" Yvain had a tradition of giving every student who he taught a small sapling from one of his plants to nurture and grow.

The little plant had many meanings, to stay grounded to the world around you, not let the power of The Force get to your head. That to nurture and care for other things is the Jedi way and as a reminder of where they came from. The plant Yvain had given Jaesa when she left his care was a Mushling, native to her races home world of Dathomir.

"I've been well, I've been well," Jaesa answered. "Training is...different now that I'm no longer a padawan. More hands-on I suppose." The woman chuckled. "And the sapling is doing well! Far from fruit-bearing, but growing just fine."

The Mushling sapling was the best gift she'd ever received. It was nice to have something from her homeworld. She'd never been, so she liked to picture her sapling multiplied a thousand fold over the landscapes of Dathomir to get a glimpse of how her planet might appear. Of course, she'd seen pictures, but seeing the image of a place was vastly different from witnessing the place in person. And, once the sapling grew into a tree and began to bear fruit, she hoped to replicate the tattoo ink used by her people. A fun little side project.

"I hope one day I might get the chance to visit Dathomir, though it seems unlikely and...unwise." The planet was Sith-held and inhabited by witches who embraced the use of the Dark Side. As much as Jaesa wished she had known her people, her planet... she was grateful she hadn't been exposed to that as a child. Minus the night terrors, her life and her youth had been a blessing.

"Good to hear, plants deserve the chance to grow properly." Yvain said with a smile as he reached out to touch the nearby flowers leaves. He listened to her comments upon her home, Yvain didn't even know where he was born. They had Lothal down as his home world at the temple but that was only were the Jedi Knight had been found and the Jedi Order had expected he had been alive for at least twenty years by that point.

"Patience young one. One day the Sith will be no more and you will be able to visit your home. When the galaxy is at its darkest that is when the light shines brightest." He finished hopping down from the table by the window and made his way across to his small kitchen area. "Would you like any food?"

"...One day the Sith will be no more and you will be able to visit your home..." Jaesa gave Yvain a sad smile. "I certainly hope so." It would be wise for her to be patient, but if there was ever a need for the Jedi to go to Dathomir, she knew she would be the first to volunteer. And if she could liberate the planet from the chains of the Sith... well, it was a lofty and unrealistic thought.

"I wouldn't mind a bite to eat." Jaesa usually didn't eat breakfast. On rough nights it erased her morning appetite, and even when she slept peacefully she still couldn't bring herself to eat in the morning. So her first meal was usually lunch or the equivalent. She was a little hungry.

One thing that struck Jaesa's curiosity was Yvain's lack of a padawan. He taught padwans--he had even taught Jaesa a few things--but he never took on a padawan of his own. Perhaps he had a padawan in the past, but in the almost twenty years she'd known him he'd not done so. "How come you haven't taken a padawan of your own yet, Yvain?"

He was excited of the prospect of cooking his old friend some food. Hopping up onto a stool so he could clearly see over the counter and talk with Jaesa he got to work. The Force was a great help for his short arms and soon random food items were floating around both the Jedi Knights head. A pair of eggs broke apart splattering down onto a now heating frying pan, butter was added and a whisk began moving to keep them stirred. Knife in hand as he began chopping some vegetables he looked up Jedi. "I had spent to much time away looking for new students like you. Training a Padawan does not fit that lifestyle. You need life lessons, physical training, mental training as well as knowledge of The Force. Much of my time was bouncing from Starport to Starport my mind drifting away with The Force. It was not good for them."

Looking back down he finished cutting the vegetables with lightning speed and tossed them into the omelette. "But now I have returned to the Temple I may look for a Padawan." He added before flipping the now finished omelette onto the floating plate before Jaesa. "Here you go."

That made sense. Jaesa knew she would've suffered if Master Faern would have been absent and across the galaxy for her padawan-ship. If, one day, she chose to take on an apprentice, she would make sure she was around enough to properly train her padawan. She would want to give what was given to her. She wasn't quite ready for that responsibility yet though.

"Thank you." The omelette looks absolutely delicious. Jaesa received the plate into her hands and sat down at the nearest table. She took a bite. It tasted as good as it looked!

"You know," began Jaesa after a few moments. "You would make a terrific master. Any padawan would be blessed to be trained by you."