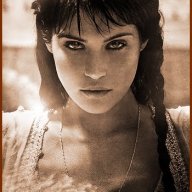 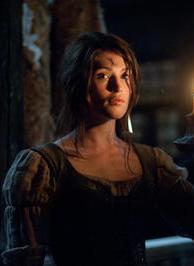 It was like rebirth. It was like death in reverse. From dead dark silence to light and sound and the desperate need to breath. The carbonite thawed quickly, leaving the body of the frozen Seyugi Dervish slumping forward. Arms weak from a century of stillness flailed weakly forward in attempt to find stability. There was but one small glowlight in the room, yet it all but blinded Ki. Her coughs to clear reactivated lungs was hushed by a rough hand on her mouth. She was too weak to rebuff the hand.

But those hands took her, gave her stability as she was half-lead, half dragged away. The body of her liberator was short-furred, like that of a Bothan. That was the limit of Ki's lucidity. Her mind bounced, unable to identify where she was, nor able to remember where she had been. As the moved so quickly through corridors, Ki gathered her wits. She was Ki Jem-Taan, of the dreaded Seguyi Dervish. Assassin, spy, follower of the aspect of the Force others called Dark.

Ki's shoulder scraped against rough wall as she was pulled around a corner. Her vision was returning, thanks to the sparse light in the hallways. She had enough lucidity to know whatever was happening it was covert, she was being secreted away, so she held her voice and questions. They came to an open bay. A black starry sky overhead revealed nighttime. The deepness of the black suggested a rural location. A shuttle sat in the middle of the bay.

"Here, a bike." the stranger indicated hastily to a speeder bike. " There are limited supplies in the saddle bags. Don't stop until suns up." Was all the voice said. The shadowy figure turned away, but Ki weakly snagged his shirt sleeve. "Why?" She asked.

"My master is a powerful Hutt, without mercy. He deserves to have his prize trophy taken from him." The voice said with gravely intention. "Go!" The stranger whispered in a harsh tone. Then he was gone. The speeder bike coughed to life then purred. A small portal in the wall opened and with less than steady handling, Ki guided the bike out and into the dry landscape beyond.

When a pair of suns began to rise over the broken line of the horizon, Ki guided the bike to the edge of the ridge she had been following, where a shallow overhang provided some shelter. The crisp desert air blowing against her face through the night had helped clear the hibernation fog. But, as she climbed from the bike, her arms and legs proved horribly stiff. She paced back and forth for a while, waving her arms and working her joints until flexibility began to return. It did nothing to dispel the terrible headache.

Only then did she notice a fierce thirst. She opened the bike's saddlebags and found a water container, which she gulped down with uncharacteristic carelessness. The water ran down her chin and over her chest. Dropping the canteen by the bike, Ki leaned against it, looking out as the searing suns began to heat the dust, rocks and sand. Where was she?

The lost woman had managed to remember time before. The Seyugi had become a thorn in the Core, the white masked Dark Side assassins' targets becoming numerous and more prominent. So they were hunted. The last hundred or so returned to Recopia and allowed themselves to be frozen in carbonite and hidden away. Ki could only surmise that she had been stolen and ended up in the Hutt's possession on a yet nameless planet. She wondered if her comrades were still waiting in silence on Recopia.

A quick search of the saddle bags revealed bantha leather clothing, short boots, a vibrodagger, food packets and a few unfamiliar coins. Ki shrugged out of the meager garment in which she had been frozen. A quick assessment showed her body seemed to have managed well in hibernation, aside from her skin being quite pallid. Donning the leathers, Ki strapped the knife to her side. The boots fit well, luckily. After scarfing down several of the food packs, Ki set out again. She needed to find a city, a spaceport.
Last edited: Jun 9, 2022

She rode through the morning, having no idea where she was, or if she was heading towards anything civilized. The air became so hot and dry, Ki could hardly stand it. The ground had grown more rocky, with outcroppings. Canyons rose in the distance. She found the shade of a giant rock and dismounted. Sliding down to the dusty ground, back against the rock, Ki found herself drifting off to sleep.

She awoke, the suns setting in the opposite horizon. Her mouth was dry, lips cracking. She would not last another day in the desert heat. Stiffly rising to her feet, rubbing her temples against the dull ache behind them, the wayward dervish mounted the bike again, and headed for the canyons, hoping to find a settlement of some sort on the other side.

As the speeder bike slid across the dry earth, kicking up a cloud of dust, other eyes had finally found her. The crack of a cycler rifle, unheard above the wind and whine of the bike, sent a slug streaking towards the racing bike. It struck precisely, disabling the vehicle immediately. Only muscle memory and training drilled into her since childhood saved Ki. Feeling the moment the bike was hit, she leaped from it. Tucking and rolling, she managed to avoid snapping her neck or breaking her bones, though the somersaulting impact left myriad bruises and cuts. The bike rolled end to end until it hit a canyon wall and exploded.

Then came the haunting sound, loud, inarticulate, they didn't sound human, though the source of them were humanoid in shape. Wrapped in heaving cloaks, even their faces were covered in cloth, except for strange eye pieces and metal mouth covers. The raced toward her, brandishing strange weapons. But Ki knew what they were. Gaderffi sticks. Tusken Raiders. Her question of where she was had been answered by the very denizens who dwelt there. Tatooine.

Rising to her feet, Ki drew the vibro-tanto from its sheath, her thumb brushing over the activation switch. The blade began to hum. She waited for them to come.

As she had so many times, the Seyugi woman steeled her body and opened her mind. The Darkness was ready, as it always was. the first of half a dozen sand people drew near, charging and whooping. With the flinch of her hand, one slid to a halt in the dust, dropping his gaffi stick and clutching at his throat. His companion faltered at the sight, then charged Ki with doubled effort. A crouching dodge avoided the swinging stick, her hand flicking towards the assailant. The choking Tusken collapsed, the second was thrown back as if hit in the chest by a blaster bolt.

Five more behind them came together, hoping to overwhelm the strange woman. Ki grit her teeth, grimacing as she focused the Force. Her head hurt terribly, and she had only a moment to wreak her havoc. Then it was planted. Every one of the threatening foes halted. Loud, terrifying sounds echoed from the canyon walls as each clutched their heads, each seeing in their mind's eye their deepest fears play out before them. In the span of two breaths, Ki had disemboweled all five.

The crack of a cycler rifle rang out again, and Ki ran as fast and as far as she could into the rocky terrain. When she found a hiding place among some boulders. She slumped down in a crack between them. Her body hurt, her head hurt, but worse still was the wretched, hollow, grieving wailing in her soul. She held her head in her hands, fingers digging into her scalp, and she wept hard, unable to explain the terrible feeling wracking her.

A sudden quiet fell over Ki, and seemingly the desert as well. Only the wind whistling through the canyon could be heard. A heaviness gripped her heart, and it seemed to drawn strength from the rest of her as it grew to a despair. She found she was still clinging to the Force, the Darkside, having drawn from it to slay her attackers. With a flinch she released it. Anguish waned, though a profound loneliness lingered. The Seyugi preached concealment of emotion, something contrary to many Dark Side cults. Ki had been good at it, an unreadable surface. But in that moment, it took all her control not to burst into tears. Something in her had changed, and not understanding it was vexation. 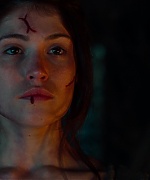 Peering out from her hiding place, Ki observed the dry terrain in the fading light of Tatooine's twin suns. She saw no sign of the Tuskens. She sighed. Surely any survivors would have gone through the wreckage of the bike, looting any supplies that remained. She had no food, water, transportation or clue as to where to find civilization. All she had was a few coins she had dropped in her pocket from the saddlebags, and the vibroblade, still humming in her hand, forgotten.

The lost woman switched off the knife and wiped the blood off on her pant leg before sheathing it. "Stupid!" She cursed herself in a whisper. The smell of blood now clung to her for any predator to pick up. Looking out again, Ki decided to sit would mean death, and to move in the daytime would mean dying of exposure. So when darkness fell, she slipped from her crevice and searched the horizon for even the faintest glow in the sky to indicate a town or settlement. She believed she discerned a lighter shade of purple in one direction, and began to move across the dusty ground towards it.

The walking became trudging. The dry, crusty ground began to become a deepening layer of sand, taxing feet, legs and hips as Ki continued to move under the light of the moon. Distant skittering often snagged her attention, and only an overwhelming weariness kept her from becoming edgy in the unfamiliar, shadowy terrain.

Her mind wandered. She had yet to learn how long she had been in carbonite hibernation, and the prospect of a lengthy time unnerved her. And then there was the uneasy undercurrent she felt. Hard to put a finger on, it flared when she drew upon the Dark Side to fend off the Tuskens, and it lingered since. So unlike her, an adept of her sect, so skilled in employing the Force in her work.

Her work. Killings, kidnappings. The recollection of those, at one time would render nothing more than technical memories of how she accomplished them. Now, thinking upon them made her uneasiness only worse. She began to consider collaterals, family left behind, towns razed, innocents harmed.

Ki fell to her knees, her fingers lacing in her matted hair, gripping her locks. She wanted to shake the memories out of her head, purge the unwelcomed invasion of conscience. But as she grit her teeth and groaned, they would not relent. "What is happening to me?!" She growled to herself. Her masters would be appalled, furious at her. They would punish her for such weak sentiments, maybe even kill her.

Her body lacked water and rest, weakened from the long hibernation. Ki allowed herself to crumple to the sand, curling up as it shifted to accommodate her form. She might as well die, they would kill her. If they could find her. Exhausted sleep overcame Ki, and she became dead to the world.
You must log in or register to reply here.
Share:
Facebook Twitter Reddit Pinterest Tumblr WhatsApp Email Share Link
Top